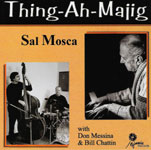 School spirit can sometimes be a liability in jazz, a genre where individuality remains a paramount attribute. Critics lumped drummer Shelly Manne in with the Cool clique early on, even though his flexibility in taste and technique embraced a host of styles from swing to hard bop to early free. Similarly, allegiance to one's mentors, while admirable, occasionally carries peripheral costs of association. Sal Mosca knows these predicaments all too well. As one of Lennie Tristano's most prodigious pupils, and a pianist to boot, people pegged him early on as an acolyte and the mantle stuck. The reductive correlation still crops up in reportage to this day, despite Mosca's sixty-plus year career in music and a body of work that has long since outpaced the influence of his one-time teacher. With much of that time spent in academia, "school in a much more literal sense has also played a role in curtailing his recording career.

These mitigating factors make this new trio recording all the more valuable and impressive. Prep time was minimal and the three players set about crafting music more for the fun of it than in the service of any lofty goal or commercial concern. To that end, Don Messina and Bill Chattin position themselves throughout as exceptional partners for Mosca. The bassist's stout walking lines recall the sure ambulatory step of a player like Leroy Vinnegar, often strolling right down the harmonic middle of a tune and buoying the action with warmly pulsing patterns. Chattin usually favors a light touch with his sticks, focusing prominently on his cymbals for color and inserting subtle snare shots to further buttress the loose-limbed momentum. Exceptions are "How High the Moon and "If I Had You, where he makes like Krupa, kick-starting the beat with a brocade of potent gregarious press rolls.

"I'm Getting Sentimental Over You opens the session in laid back fashion. Mosca leads early on, but defers congenially to Messina in the second half. The tune ties off with a string of muscular exchanges between the leader and Chattin, each man upping the energy quotient and parceling out resourceful statements from his respective instrument. "Nowhere unfurls on a plush pizzicato line from Messina, flanked by Chattin's chattery ride cymbal. Mosca deftly improvises atop the sparse support, commanding closely calibrated two-hand variations that fuse surface lyricism with an underbelly of wily menace. The concluding segment comprises another gradually unspooling confab between the three with Mosca's clever adaptability at full measure.

Elsewhere, Messina's fast break opening line on "I'll Remember April pushes Mosca to editorialize the melody in a most ingenious manner, interpolating and excising notes without ever losing the gist. Later it's a stunning display of angular jigsaw-fitting chords that perch playfully atop the bustling rhythm of bass and drums. Each of the tracks could fill a small chapbook with a checklist of exemplary improvisatory junctures. Mosca never really left, but this disc makes an airtight case for a place of prominence in the fellowship of modern jazz pianists.

Visit Sal Mosca on the web.