By LARRY KOENIGSBERG
January 1, 1999
Sign in to view read count 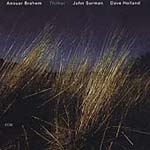 Once again ECM expands the boundaries of jazz. This brings up the question of whether this music is jazz, and purists would argue that it's not: no blues, no standards, no drums. Why not go all the way and decry the absence of banjo and tuba? The fact is that there are elements of jazz here, including group improvisation, rhythmic propulsion, and two established jazz players, Surman and Holland. But the listener who appreciates this release will be someone who likes music which is original and thoughtful, enjoys the exoticism of the references to the music of North Africa, and appreciates the seamless fusion which these three players bring to these extraordinary performances. "Reference" is the right word here, since there's nothing parochial or regional in this music: it's truly a meeting on common ground.

There's a focused intensity in the performance of these compositions. The pieces are complex and varied, with long meditative out-of-tempo solos turning into fast and exhilarating ensembles. It can be difficult to determine where arrangement ends and improvisation begins, since these three masters have all reached a point where adding to the mix comes spontaneously. Sometimes the results sound close to the music of Brahem's native Tunisia, and at others they have a late-night urban quality, everyone gone to bed except the musicians in their recording studio. Whatever this uncategorizable music is, it's fresh and beautiful, as the instrumental combination of horn, oud and bass both touches many traditions and stands uncaptured by any. The wide ranging expression and beautiful production ensure that this recording will stand up to repeated listening.