By WALTER KOLOSKY
October 25, 2003
Sign in to view read count 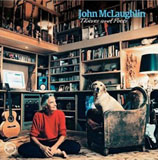 Thieves and Poets is the latest offering from guitarist John McLaughlin. Similar in concept to two of his previous albums, The Mediterranean Concerto and Time Remembered, but different in execution, Thieves and Poets is well worth the ten year wait McLaughlin fans have endured to hear the piece recorded.

In one form or another, McLaughlin's three-part acoustic guitar and symphony suite has been in existence since the early nineties. Originally known as Europa, it has received some rewriting over the years and in particular was updated to cater to the skills of some of McLaughlin's highly touted guest soloists.

McLaughlin's liner notes talk of the Old World, the New World and the unification of these worlds as the thematic motifs of each part of the suite. Clearly, he borrows ideas from his own creations such as Shakti, his first concerto and tunes such as his standby "Blues for L.W." to paint a wonderfully textured canvas. In addition to self-quoting, McLaughlin manages to find some room for Charles Mingus and allows the influence of others to cast some shadows as well. Part 3 has a very distinct Bernstein feel that McLaughlin acknowledges but says was not done on purpose. It would make an impressive movie score.

Also appearing on the album are four jazz standards dedicated to pianists Herbie Hancock, Chick Corea, Bill Evans and Gonzalo Rubalcaba. McLaughlin recorded these tunes with the same acoustic guitar Aighetta Quartet he used on the Bill Evans tribute album. This time around the tunes are less dense and recorded with much lower reverb levels. These changes are very welcome as each tune is provocative without sounding cavernous.

McLaughlin's acoustic guitar is much higher in the mix than on the Mediterranean Concerto. As much as I liked the Concerto, sometimes you could not hear the guitar because of the overwhelming presence of the orchestra. The symphony orchestra I Pommeriggi Musicali di Milano performed this suite and attained the natural sounds that McLaughlin's Belo Horizonte band had formed with electronics. The guest soloists play with energy and purpose.

Thieves and Poets is a very pleasing outing on several fronts. The melodies linger, McLaughlin and his fellow musicians play beautifully and the presence of a sympathetic symphony orchestra will have you hoping for more.