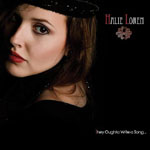 They Oughta Write a Song sees the 24-year-old Halie Loren getting back to her roots as a jazz singer. The album consists of 13 tracks, including not only jazz standards, but three originals and a half-handful of "jazzified" classic covers. Those new to jazz would be hard-pressed to tell one from the other, so deftly do Loren and her backing band—pianist Matt Treder, bassist Mark Schneider, percussionist Brian West and trumpeter Tim McLaughlin on trumpet—dive in and make themselves home in a sea of lush, jazzy warmth.

The opening title track sounds like a standard (and, if there is any sense of fairness in the world, it will be someday) but is actually an original, co-written by Loren at the tender age of 18 in Nashville. The other two originals, "How Should I Know?" and "I Don't Miss It That Much" sound remarkably similar to tracks from the soundtrack to Midnight in the Garden of Good and Evil(1997), but are likewise a well-balanced mixture of classic jazz and modern sass.

Loren's interpretation of non-jazz classics is equally competent, taking familiar songs from other genres and reinterpreting them in novel ways. Procol Harem's "A Whiter Shade of Pale" dials back the "Lucy in the Sky with Diamonds" vibe and replaces it with something smokier, sassier, and quite different. Pete Seeger's "My Rainbow Race" loses the folksy focus and goes a bit more Latin, with percussion and bass underlining Loren's thick, rich vocals. Otis Redding's "(Sittin' On) The Dock of the Bay" gets a somewhat less melancholy interpretation, retaining the song's soulful wistfulness while adding a bit more bounce and sway.

The bulk of the album, however, is composed of jazz standards, which necessarily draw comparisons with other such covers. "Autumn Leaves," covered by everyone from Nat King Cole to Paula Cole, is, by way of comparison, minimalist. While other versions of the song contain layers of instrumentation—Paula Cole's version, on the Midnight in the Garden of Good and Evil (Warner Bros., 1997) soundtrack, even adds percussion to mimic the sound of rustling leaves—here it's just Loren and Treder, voice and piano, boiling the song down to its basics. Osvaldo Farres' "Perhaps, Perhaps, Perhaps" appears as well, sung half in Spanish and half in English and, while clocking in at about the same length as Cake's cover on Fashion Nugget(Capricorn, 1996), is distinctly more traditional and definitely sexier.

George Gershwin's "Summertime" is also worth a special mention. Originally composed for Porgy and Bess (1935), the jazz standard has been covered by everyone from Louis Armstrong and Ella Fitzgerald to Janis Joplin, always serving to frame each singer's particular vocal talents regardless of instrumentation—Joplin's mournful shrieks atop electric guitar; Fitzgerald's warmth contrasted with Armstrong's growl. Here, Loren's clear-as-a-bell lilt and tease is half "drifting off to sleep" lullaby and half "stay up till sunrise" striptease, allowing her to make the song her own.

They Oughta Write a Song; A Whiter Shade of Pale; Blue Skies; Autumn Leaves; Fever; God Bless the Child; My Rainbow Race; Perhaps, Perhaps, Perhaps; How Should I Know; Summertime; I Don't Miss It That Much; The Dock of the Bay; As Time Goes By.