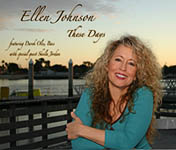 Despite a terrific press reception to her work, jazz singer Ellen Johnson unfortunately is not the household word she should be. She has previously recorded two albums, Too Good To Title (1993) and Chinchilla Serenade (1997); These Days is her third.

Ellen Johnson, originally a Chicagoan, now lives and works in San Diego as an musician and educator. She teaches as part of the voice faculties of the University of San Diego and the Old Globe Theatre. Since the mid-1980s, Ellen Johnson has been conducting voice clinics and has performed special concerts of Duke Ellington's Sacred Music. At the 2004 IAJE Conference in New York, she moderated a panel discussion entitled "The Evolution of Vocal Jazz Singing: Where Are We Headed?"

These Days should be a clarion call to listeners unfamiliar with her previous contributions. Very much inspired by jazz vocal icon Sheila Jordan, who joins Johnson for two duets here, the well-rounded album displays multiple examples of jazz vocal styles. Beginning with a duet with bassist Derek Oles on Jackson Browne's "These Days," Johnson transforms the 1970s acoustic rock ballad into a meaningful jazz statement without compromising the lyrics or melody. Just like Cassandra Wilson, she picks material from another musical genre.

The same thing applies on Sandy Denny's "Who Knows Where Time Goes," more often associated with Judy Collins. The song was originally presented in a spare guitar-accompanied delivery, and the substitution of Ole's bass for the guitar leaves the tune as powerful as it was in the late 1960s. Another tune, "I Feel The Same," was composed by Americana singer/songwriter Chris Smither, and three more duets with Oles will remind jazz vocal afficianados of the Sheila Jordan-Harvie Swartz collaborations over the ruins.

Johnson's ensemble is a most effective one. In addition to Derek Oles, guitarist Larry Koonse takes some tasty solo opportunities, provides bossa accompaniment on Jobim's "Esperanca Perdida," and also supplies the comping usually done on a piano. Sheila Jordan appears on "The Crossing" (her own composition) and "Little Messenger" (written for her by Johnson). The leader supplies a pure vocalese effort on "Inspiration" and shows her appreciation of the music of Charles Mingus on "Noddin' Ya Head Blues," with lyrics written with the permission of Sue Mingus, and "Nostalgia in Times Square," with lyrics supplied by the singer.

Unfortunately, the inner notes on this digipack release (including personnel and title information) are impossible to read without a magnifying glass.

These Days; No Moon At All; The Crossing(with Sheila Jordan); Inspiration; I Feel The Same; Noddin' Ya Head Blues; Esperanca Perdida; Who Know Where The Time Goes; If I Should Lose You; You Don't Know What Love Is; Nostalgia in Times Square; Little Messenger(for Sheila Jordan).