Albert Beger / Gerry Hemingway: There’s Nothing Better To Do 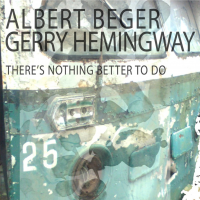 This live album documents the first musical meeting between Israeli sax hero Albert Beger and master drummer Gerry Hemingway. The two met in November, 2011 in Tel Aviv's Levontin 7 club. They did not exchange any notes before their gig, or even sketch a loose road map for the improvisations to follow. Instead, both trusted their musical intuition and instincts—and they were absolutely right. There's Nothing Better To Do captures a rare, immediate musical affinity, a breadth of shared musical vocabulary, and a mastery of free improvisation. Beger and Hemingway do not seek to explore obvious sonic avenues, choosing, instead, to explore themselves through this unique meeting.

"Staying Alert" accurately describes their duets. Hemingway begins with sparse playing on bells and the skins of his drums but does not try to enforce any fixed rhythm, enabling Beger's soprano sax to soar gently around him. Their interplay intensifies but remains loose, each player's responses changing course in an instant. Both explore sounds on the beginning of "Let Go Of Your Mind," patiently channeling these raw timbres into a slow-cooking, massive and powerful piece before concluding in a quiet exchange of whispering textures.

"Butterflies" explores another path. Hemingway plays percussion instruments and whistles, while Beger vocalizes through his saxophone's mouthpiece, transforms this duo into a leisurely melodic song sparked with gentle humor. "Limited Edition," on the other hand, is a short solo tenor piece by Beger that stresses the melodic vein of the previous duet.

Hemingway beings "Missing You" by sketching an infectious, polyrhythmic drum pattern. When Beger responds by blowing fiery tenor sax both add more power and passion, turning the piece into a soulful, almost swinging, blues. Only the title piece (saved for the end) follows the vague outlines of the 1960s take-no-prisoners free jazz approach, but they still opt for a more restrained, emotional approach to the genre.

This excellent duo has only begun to explore its huge potential.

Staying Alert; Let Go Of Your Mind; Butterflies; Limited Edition; Missing You; There's Nothing Better To Do.