LaVon Hardison: There Will Be Trouble 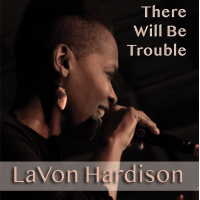 LaVon Hardison, a vocalist originally from Boston, with roots in gospel, specializes in cover versions. Which is to say that she takes old pop songs and gives them new meaning... sometimes a darn sight more than they deserve. Other times—as Tom Lehrer once put it—she kicks them when they're down.

The Rodgers and Hart number "My Funny Valentine," which opens proceedings, was written for the long forgotten 1937 musical "Babes In Arms." It went on to become a jazz standard, appearing on 1,300 albums, performed by more than 600 artists, perhaps most notably by Chet Baker. In 2015 Baker's version was inducted into the Library of Congress's National Recording Registry for the song's "cultural, artistic and/or historical significance to American society and the nation's audio legacy." Surely any vocalist would think twice before mucking about with a national treasure like this. Not Hardison—she and her merry men give the song a jaunty new workover, featuring a tricksy tuba solo by Jerome Smith. It's all very clever but totally unsuited to the spirit of the song.

She's on safer ground with the next number, "Frim Fram Sauce," a knockabout jazz comedy number from 1945, with which Nat "King" Cole had a hit. Exactly what the sauce was is anybody's guess. Not to mention the oss-en-fay with sha fafa that came with it. Hardison doesn't care. Unburdened with having to find new meaning in the song, she just gets on with singing it and obviously thoroughly enjoys it. It's one of the best numbers on the album.

"Should I Stay Or Should I Go" was originally by the British punk rock band, The Clash, featuring on their 1982 album Combat Rock. A line from the lyric serves as the title of Hardison's album. While the song was never exactly profound, she genuinely does give it a new, jazzy identity.

Better still is her superb version of Duke Ellington's "Mood Indigo," including a terrific instrumental passage and some nice interaction towards close of play between Hardison and Hans Teuser's clarinet. It's worth the price of the album.

"Heat Wave" was originally penned by the Holland-Dozier-Holland song-writing team at Tamla Motown for Martha and the Vandellas. Hardison tries hard to make something of it but alas... As for Simon and Garfunkel's "Fifty Ninth Street Bridge Song (Feelin' Groovy)" and its lyric in which the vocalist is called upon to talk to a lamp-post, well come on! The song would have been better left in sub-hippy obscurity—it was doing no harm there.

"It's Only A Paper Moon" and "Sweet Georgia Brown" have both been done if not to death then pretty close. With time running out, Hardison makes a vain bid to resuscitate the old Chiffons' hit "One Fine Day" by treating the teenage lyric with more gravitas than it can possibly bear.

Title: There Will Be Trouble | Year Released: 2018 | Record Label: self-produced