By HRAYR ATTARIAN
December 19, 2011
Sign in to view read count 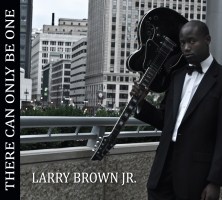 Guitarist, composer and educator Larry Brown Jr's debut, There Can Only Be One, has both feet firmly planted in a rich musical past but remains a modern record in its delivery and execution. There are vague hints of Wes Montgomery and Kenny Burrell in his playing but his style is all his own, and these faint traces are more of an homage than a derivation of their work.

The uplifting gospel feel of "Come Home" features Brown's complex lines built on a deceptively simple and catchy tune. His unique, deeply resonant guitar is drenched in the spirit of the electric blues on the aptly titled, moving and intellectually satisfying "Bluesy Chronicles," also featuring Stuart Mindeman's quite advanced pianism, which travels far from the melody while keeping it, nevertheless, in its sight.

Mindeman's careful utilization of notes and pauses is reminiscent of Ahmad Jamal on "Don't Turn Away," a piece that also features sensual vocalist Sarah Marie Young, a singer whose unique phrasing remains in the jazz idiom and adds emotional depth to almost any song.

The R&B-like "Just Been Thinking," with Quinten Coaxum's tightly woven trumpet solo mirroring both Brown's own languid yet stimulating sound and Mindeman's easily flowing notes, is a multilayered composition that feels deceptively straightforward. This multifaceted aspect is also evident on the hard bop "The Eye of the Beholder," with Brown's logically meandering guitar and Coaxum's mellifluous trumpet.

The exploration of hard bop continues on the title track, sounding like it came right out of the classic Blue Note vault with a trumpet and guitar frontline. It opens with Nick Jost's loose bass, followed by Brown delivering a rapid-fire improvisation supported by Xavier Breaker's increasingly propulsive drums, culminating in a polyphonic finale.

Jost's melancholic bass starts off the emotionally charged "Megan's Law," with Brown's own serenade reaching deep to the essence of the theme. Jost demonstrates his walking swing technique on the upbeat and energetic "Sweet Baby Ray" a retro-esque original with Brown's bop-ish guitar bowing to the memory of Charlie Christian.

Brown's freshman work is a summary of his various musical influences. Rooted firmly in the mainstream it does not break new ground but is nevertheless stimulating and delightful.

Come Home; Just Been Thinkin; Don't Turn Away; The Blues Chronicles; In The Eye Of The Beholder; Falling Stars; There Can Only Be One; Megan's Law; Grandma's Song; Sweet Baby Ray.

Title: There Can Only Be One | Year Released: 2011 | Record Label: Self Produced