Shane Endsley and the Music Band: Then The Other 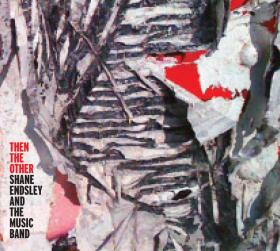 Naming your working ensemble The Music Band might seem like a very tongue in cheek gesture at first. However, Shane Endsley's second release as a leader (and the first record to come out on Kneebody's Low Electrical Records) shows that the versatile and quietly charismatic trumpeter has a sincere interest in playing music, both jazz and beyond. Then the Other is a widespread, patchwork quilt of Endsley's approach to composition, improvisation and group dynamics.

Despite being well-known for his work in the fearlessly electric Kneebody, this quartet's mixture of acoustic sounds is both subtle and exciting, combining Ted Poor's colorful, carefully executed drumming, bassist Matt Brewer's deep yet fleet touch, pianist Craig Taborn's gentle and effortless approach to modern jazz, and Endsley's throaty tone.

Melody is an extremely strong factor on this record. "Big" half swaggers and half croons, the ensemble sometimes punching with Endsley and sometimes floating beneath him. The mournful but resilient waltz, "Slow Gesture," has Endsley aching out a modern jazz-meets-gospel melody while the band sways along. Not all the melodies are joyous however; the sinister simplicity of "Two Parts" wraps itself in pulsating twists and Endsley's strained extended technique. The singable melody in "House" lies not in Endsley's angular line, but Brewer's—a track that also finds Taborn at his fieriest.

Endsley is not afraid to get dirty and delightful when he approaches realms outside jazz. "Gallery Piece" has the sprightly syncopation of Caribbean music with an impressionist touch, as if Debussy had studied mento music instead of Hungarian folk dance. The gem of the whole disc is "King's Country Ramble," a rowdy, boot-stopping cowboy number. Poor's two-step is remarkably potent, while Brewer's advanced playing falls into what might be called the "post-washboard" style of country bass. Taborn, in an enigmatic twist, plays his most sublimely and serenely in the rowdiest atmosphere and Endsley's solo contains song-worthy melodies in and of themselves. The slight harmonic twists do not come off as Endsley trying to be hip; they are the signature notches in his lasso.

Not all of Endsley's compositions have strong melodic content, nor is that any sort of fault. The tunes that search without finding any concrete answers—"Then The Other" "Pedals" and "Young Benjamin"—allow for the most interplay and most textural exploration . "Conditional Love," which is even more mournful than "Slow Gesture," finds Brewer at his big moment with a quiet whirling solo. The Music Band leaves a lot of possibilities open, ensuring their future and more satisfying albums to come.