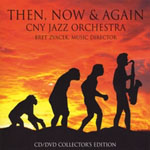 The Central New York Jazz Orchestra (CNYJO) is a sixteen-piece big band led by Musical Director Bret Zvacek, providing year-round concerts to the general public and performing in schools within the entire Upstate New York region. The musical arm of the CNY Jazz Arts Foundation (CNYJAF), a non profit educational organization established twelve years ago, Then, Now & Again is the group's debut and chronicles the band's development through those years. The album is part of a CD/DVD two-disc set with half of the titles recorded in November 2007, in the Persian Terrace of the historic Hotel Syracuse, and the balance recorded at Linden Oaks Studios, in Rochester, NY.

The music is strictly big band, with no vocals, and has just about something for everyone. As drummer Larry Luttinger, Executive Director of the CNYJAF, states "We didn't totally realize how timely and relevant our total set of tunes was until we started putting them together as a set for the recording. Your favorite jazz could be Basie, Herman, Thad Jones and Mel Lewis, Rob McConnell, or the Vanguard Band—there's really something for everyone on this record."

The program contains arrangements and compositions from CNYJO band members, including two new charts from Zvacek and new arrangements of several jazz standards. Keyboardist Rick Montalbano, Sr. contributes one of the best big band arrangements with his energetic "Hip Not Hop," featuring stylish solos from trumpeter Dave Blask and John Rohde on the tenor.

Zvacek provides an interesting arrangement of the Miles Davis/Ron Carter tune, "Eighty-One," on which trombonist Joe Colombo takes the solo. Trumpeter Jeff Stockham and the impressive woodwind section blow the house down on Heyward/Gershwin' classic "I loves You Porgy," leaving no doubt that this is one serious orchestra.

The band does show its lighter with the light ballad "The Midnight Sun Will Never Set," showcasing a soft and tender sax solo from Joe Carello. In stark blistering contrast, the band explodes on the up-tempo "Status Quo," playing in high gear with solos fast and furious. More challenging are Zvacek's gentle "Things Happen" and intricate "Shimmer."

The big band session ends with Pat Ballard's delightful "Mister Sandman," a lush ballad interpreted warmly by trumpeter Rob Robson and the rest of the band. Then, Now & Again is most definitely one of the finest sessions of pure big band jazz released this year. Containing excellent charts, world-class soloists and an orchestra of first-rate musicians, it doesn't get any better than this.