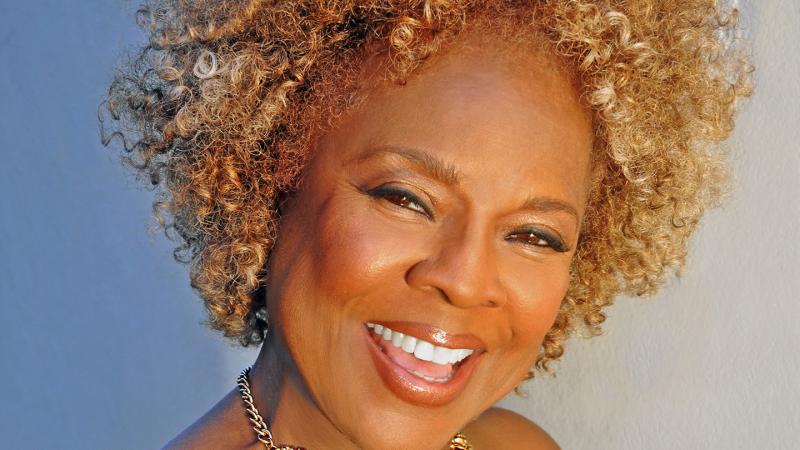 It was a beautiful starry night. The weather was just right. Perfect for a stroll down Sunset Boulevard in the heart of Hollywood. I took a short cut walking from the Walk of Fame as I made my way to the Catalina Jazz Club, one of L.A.'s premiere jazz venues. I heard about a specialty show, Motown, Memories and Me, featuring Motown legend, Thelma Houston with a special surprise opening act.

Entering the club, the mood in the room was festive filled with guests half an hour before the show start time. People were networking and ordering appetizers as they awaited the musical presentation to begin. Thelma Houston walked on stage before the show started. She took time to speak with guests with the southern hospitality that is familiar in jazz clubs in the city of New Orleans, the birthplace of jazz.

Her smile lit up the room as she greeted guests prior to the show on the front row and waved to the rest of the crowd filled room. The club was transformed that night by her energy and enigmatic smile. There was something unexpected to come. When she left the stage to prepare for her return, the stage lights turned up to a cozy spotlight and jazz poetry began to flow in the air. The poet of the night was Taalam Acey, the founder of Slam Poetry. I remember watching his him perform on BET and seeing some of his videos on YouTube and so did the people at my table.

Acey walked on stage as an ambassador of jazz poetry with the look in his eyes that he had something special to say. His subject of the night was the beauty of womanhood in all of its roles, descriptions and dimensions. Sisters, mothers, girlfriends, grandmothers, and aunties were celebrated in a concentrated fusion of jazz poems spoken with his vivacious delivery of spoken word.

His poems came alive echoing in reverb off the walls and back resonating in the minds and hearts of each individual who took in his poetic sound in the key of jazz. His words flowed in staccato at times, softly at certain moments and resounding at others. He punctuated words like "you are a queen" and "you are beautiful." Women smiled as if they identified with his goal to identify and accentuate our self-worth and purpose. He was emotional in his upbeat poetic improvisational rhythms at just the right times.

His spoken words were artistically effervescent as he demonstrated his solid skills as a musical master of the sound of poetic monologue. His improvisational rhythm set the tone for the eclectic creativity that was a pleasant surprise not often experienced in watching an opening act at a Hollywood night club.

Acey commanded the crowd as he accentuated the need to celebrate and honor mothers and sisters with words such as "You should be worshipped." He rhymed on the beauty of life and the power of love and forgiveness. When he left the stage, the audience wanted more of his nurturing poems of self-worth. The lights changed and lit up higher. It was time for the woman of the hour. Miss Thelma Houston.

Houston took to the stage and with a high energy musical intro, she grabbed the microphone and proceeded to talk to us first over the music. She looked across the room as if to make eye contact with each individual in the room. She spoke with the spirit of inner strength, conviction and joy. This was her moment. She proceeded to express that we were about to experience her personal story of her journey in music from the beginning to the present.

From triumphs to difficulties, she was about to share it all in a concentrated show of musical theater complete with choreography, dance and song. Her flow was seamless as she talked. At some point, she began to sing. At the right time, she simply sang. Her voice belted with the power of her early years in Motown. She spoke of being well preserved as an artist and entertainer to the delight of the crowd.

Houston sang about her dreams to become a successful singer. Her voice captured the strength of the blues intertwined with soul, jazz and her personal inner truth culminating into a night of musical truth and personal self-expression. She sang what she felt and it was felt by all. Her memories came alive in each song. Her emotions merged into the lyrical phrasing weaving songs across genres from gospel to jazz to pop/soul and more.

Thelma's power vocals carried song after song effortlessly. She sang her life story vocally soaring in the zone of music over the live band presenting a medley of back to back Motown hits from Smokey Robinson, Stevie Wonder, The Temptations and so many others. She made each song her own capturing the message that she wanted to get across in a night of powerful musical theater. She sang hit records from the Motown era modernized with her soulful emotional vocals that transformed the night into an evening of classic entertainment.

Houston took on the blues that night like an ambassador who went through tough times and good times and remained unbroken. Her dream kept her strong just as her faith in the future. The Music was her means to get there. She was born to sing. The foundation of her show was musically neopolitan with each song flavored in varying degrees with blues, jazz, pop and gospel as she wove the story of arriving to Motown and beyond before our eyes. It was about her journey being discovered by Motown and finding the yellow brick road to get there. It was about continuing afterwards as an independent artist to the present day time.

Throughout her live performance she emphasized the importance of being true to yourself. She made us think about following our dreams. She emphasized that if she can get there anyone can get there. "Just don't give up." The show ended with a standing ovation and the emergence of a surprise guest. Mr. Berry Gordy was acknowledged in the room. In that moment, the crowd in attendance united in applause to celebrate the contributions of the music of Motown and the people who made it happen with Gordy at the helm. To think it all started with the blues and its evolution to jazz. Then rhythm and blues.

When the show was over, no one wanted to leave and they didn't right away. A night of jazz poetry and the heartfelt blues and soul of an icon like Thelma Houston are the elements of a night to remember and to see yet again. Thelma Houston's Motown, Memories and Me is a testament of the power of the gift of music, its hope and ability to capture Houston's personal story in a night of dance, singing and live music with a touch of authentic jazz poetry.

As I walked out at some point, I had taken in the essence of her pearls of wisdom and the inspirational energy in that room. I felt strengthened by it. Jazz is like life. It continues to edify, grow and change in shape and form to meet each generation with a "Bonjour" and a mirror to the past, present and future.