Jon Mapp: The World Will End with A Bang 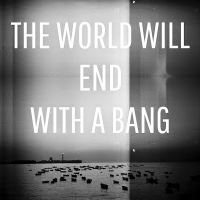 British electric bass guitarist Jon Mapp suggests two parallel ways to experience his debut solo album. The first, and most impressive one, feature his unorthodox technique and personal improvisational approach. Mapp plays the bass guitar as an instrument that its sonic spectrum is similar to the acoustic guitar, varying his gentle, melodic touch with percussive sounds. He uses pedals and a laptop to create different looping layers of music and trigger electric effects.

The second way promises an imaginary narrative of an unarmed journeyman in a psychedelic-nightmarish adventure. According to Mapp, this unwritten surreal story is a cross between Dante's Inferno, David Lynch's TV drama Twin Peaks, and Richard Adams' adventure novel Watership Down. The titles of the nine pieces, all written prior to composing the music, are supposed to reflect the chapters of the story.

But while Mapp's technique is indeed fascinating, the delivery is intricate and nuanced, the compositional ideas opt often for the lyrical and the melodic, following an obvious, linear progression. The thin and often light sonic envelope and the straight-forward articulation of his musical ideas lack the emotional power or the disturbing energy that may charge this story with dark, lasting overtones. There are fleeting segments of weird, threatening sounds in few of the pieces as in "Journey Into the Woods" and "From the Rocks Comes the Trees" but the effects-laden atmosphere blurs its desired impact.

Judging by this album and its last piece, "The Bang," it would be pretentious to imagine that the world will end with a bang, but thankfully not by "with a whimper," as poet T.S. Eliot predicted. Regretfully, it may end with just a virtuoso showmanship, but at least with a melody.

The Foxes Know All About You; The World Will End With a Bang; Journey Into the Woods; Fanfare for the Owls; You Will Know When; In the Midst of the Chaos, a Rat Feeds Her Pup; From the Rocks Comes the Trees; Meeting the Follower; The Bang.

Title: The World Will End with A Bang | Year Released: 2014 | Record Label: We Are K Records