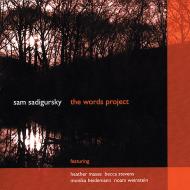 Ambition is good. It focuses the mind towards a distant goal, keeping it pointed in the correct direction. When artistic ambition is combined with the talent to fulfill the plan, something special is bound to happen. The Words Project is reedman Sam Sadigursky's leadership debut, and that he chose to mix words and music is ambition of the highest order. That it succeeds so completely is a tribute to the faith Sadigursky had in his vision.

Music is mysterious and abstract and achieves its effects upon us in a still unknown manner. It seems to invade our emotional being directly, almost against our will, after which we think about and conceptualize what just happened. Words are the result of the process of conceptualizing and abstracting reality, ultimately point back to reality it references. Reading or hearing a word is to invoke the concept in our consciousness, after which emotions are felt.

The collision of these diametrically opposite things which work within us in different directions can many times not be pretty. Vocal jazz is to many a lesser art form, bringing the perfect tune and improvisations upon it down into the mud of the concrete.

However, one can look at poetry as an attempt to communicate emotions directly through softening the words' concreteness by raising their rhythms and sounds to the same level as their meaning. Furthermore, a (good) poem's meaning is hidden behind indirection, implication and ellipsis bringing it into the very abstract realm in which music dwells.

Should the poems be read before listening? Should the liner notes be read while listening? Is it even possible to keep a poem in one's mind when only hearing it, especially when part of one's attention is directed towards the music? Since the music presumably came second, as settings of the words, is its function to help bring forth the poem's meaning? Then again, how can that be when the music draws attention away from the words?

These questions will be answered here only indirectly. Sadigursky's choice of using the uninflected, pure upper range female voice is telling in that such singing brings the voice closer to becoming just another instrument, placing emphasis on how the words sound. Also, pure vocalization occurs many times, further separating the voice from the words.

The music of The Words Project is glorious and easily stands on its own, with many impressive purely instrumental sections. This complex, deeply effecting work is a real paradox in that it is simultaneously a whole, and also two parts that cooperate and compete. Listening without and then with the notes will begin to answer the questions.

After Paradise; Still Life; I'm Glad Your Sickness; Water, Aspirin, You; Love; In The Kitchen; Gardener And Flower Too; You're; Epitaph For A Pair Of Old Shoes; After Love.