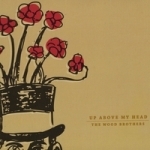 Highlights of The Wood Brothers' live performances invariably include ingenious renditions of choice covers in addition to their own well-wrought originals. So it stands to reason they'd find it perfectly natural to put together this mini-album of outside material by the likes of Beck and Allen Toussaint, among others.

Returning to the strictly two-piece alignment from which they began and upon which they have built on their successive studio work, Up Above My_Head bristles with joyous energy right from the start of its opening title track. The Wood Brothers' chemistry has proven itself perfectly natural, almost to the point of being uncanny, and the spontaneity of this performance is an ideal example of how they play simultaneously with such abandon and precision.

On Steve Earle's "Mystery Train Pt. 2," the pair moves at a more temperate pace, mixing the gospel strains of the preceding track with a genuine blues element accentuated by Oliver's electric guitar work. Their dual vocals have become an integral part of their work, as Chris becomes more comfortable singing and David Kent's engineering ensures that the warmth and intimacy of the two musicians' playing and singing together remains consistent throughout the CD's eight tracks.

The material becomes more familiar as the tracks unfold, but with "Liza Jane," The Woods keep very fresh that which is familiar. Case in point is The The Beatles' "Fixing a Hole," where the simplicity of their approach highlights not just the melodic structure of the song but its whimsical quality. The latter virtue comes to the fore in Oliver's vocal phrasing, as well as Chris' bass solo and the off-the-cuff tenor of the lyrics thus becomes a performance in itself. Perhaps an even braver choice is "Midnight Rider," so closely identified with Gregg Allman but here retooled and infused with a sense of adventure and possibility, replacing its usually shadowy foreboding.

"Get Out of My Life Woman" may be the most conventional arrangement on the CD, but it stands as a well-sequenced change of pace amidst the novelty that surrounds it. The natural blend of the Woods' voices extends to their complementary musicianship as it is uncanny how they anticipate each other's instrumental moves there and on "Comes Love."

This title's original limited availability at The Wood Brothers is in keeping with the siblings understated approach to their career and the work itself, but Up Above My Head deserves all the attention it can get.

Up Above My Head; Mystery Train Part II; Liza Jane; Fixing a Hole; Get Out My Life Woman Sing It Again; Midnight Rider; Comes Love.

Title: The Wood Brothers: Up Above My Head | Year Released: 2009 | Record Label: Self Produced