By DOUG COLLETTE
November 4, 2012
Sign in to view read count 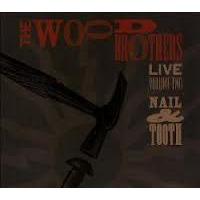 While the Wood Brothers presented its live album, Sky High (Southern Ground, 2012), as a document of how its music has evolved since it resumed its partnership in 2004, it really didn't depict the progression as clearly as its successor does. As a companion piece Nail & Tooth illustrates how far the duo has come as collaborators, particularly as percussionist/vocalist Jano Rix has become integrated into the unit.

Short as it is, "Up Above My Head" sets a deeply earthy emotional tone with the pound of kick drum underpinning the gospel-styled vocal call and response. It's nothing, however, compared to the searing slide electric guitar Oliver Wood lets loose; Rix's smashing of his drum kit matches the cacophony which is all the more uproarious after the bittersweet harmonica and carefully placed bass figures from Chris Wood (which continue below the joyful noise).

This onslaught is a far cry from the understated charm of the Woods' work as a duo, as so effectively depicted by the wholly acoustic textures within "When I Was Young." If there's a criticism to be offered of the Brothers based on these live albums, especially this second one, it's that the band is immediately ready to render them obsolete, if not in the form of such folksy cuts (which would be ideal fodder for unplugged first sets in concert), than in terms of extended improvisation. There's no denying the swagger within "Spirit," but it's so slyly infectious, and its slightly-less-than four minutes goes by so fast, this track only whets the appetite for more, especially as the entrance of jagged electric tones turns the track in a wholly different direction the likes of which the band might pursue at length in its next stage of evolution.

Oliver Wood's singing is evocative no matter the style of song, so to hear him extemporize with his voice would be as seductive as when he's chortling out loud while the three musicians careen through "Shoofly Pie." The crowd pleasing gestures here might be purely precious if, again, the vocal interplay was not so potent, here in three-part form. Likewise, on "Ain't No More Cane," there's an emotional fervor in those voices indicating the trio are moving itself as well as its audience. the individual vocal turns here are, no doubt, also meant to deliberately echo those of The Band, as the contrasting tones of each voice compares favorably to Rick Danko, Richard Manual and Levon Helm, all of which is in keeping with the dedication of Nail & Tooth to the memory of the late drummer/vocalist.

There's clearly a logic to The Wood Brothers' production of this pair of live albums and it's nowhere more evident that the placement of that traditional. Its definition of bittersweet precedes a chirpy version of Allen Toussaint's "Get Out of My Life Woman" which, in itself and in contrast, illustrates how expert songwriting and performing uncovers emotions far beyond just those rendered by the words and music. The instrumental interval within that performance cements the otherwise ineffable impression.

Then, as if to remind of their own compositional expertise, "Atlas" concludes Nail & Tooth, its high-stepping beat confirming the authors as musical bon vivants who, by dint of the cauterizing slide guitar, know the blues both hurt and heal.

Tracks: Up Above My Head; Where My Baby Might Be; When I Was Young; Spirit; Shoofly Pie; Ain't No More Cane; Get Out My Life Woman; Atlas.

Up Above My Head; Where My Baby Might Be; When I Was Young; Spirit; Shoofly Pie; Ain’t No More Cane; Get Out My Life Woman; Atlas.