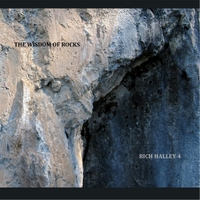 Tenor saxophonist and composer Rich Halley believes in the wisdom of rocks, or so one must assume from the title of his 16th album as leader, The Wisdom Of Rocks. It's probably smart to acknowledge Halley's expertise in such matters: as a qualified field biologist who lives in Oregon he's no doubt encountered more than a few rocks in his time. As a musician, composer and band leader Halley has a distinguished and extensive discography. The Wisdom Of Rocks follows the tradition of much of Halley's work, especially with the quartet format—inventive and powerful playing, exciting compositions, imaginative improvisation, all leavened with plenty of good humor.

Halley's 4 includes trombonist Michael Vlatkovich, bassist Clyde Reed and drummer Carson Halley—a line-up that's been together since 2010 and has already produced three critically-acclaimed albums. At the core of the 4's sound is the mighty combination of tenor and trombone—a combo that sounds even stronger and tougher on The Wisdom Of Rocks than it has on previous outings. At its fiercest (on "Of Fives And Sixes" or "The Atoll") the Halley/Vlatkovitch attack is as powerful as any other front-line pairing in jazz. At their gentlest ("Conversation In Blue," "Faint Scattered Lights" or, especially, the relaxed "Heat In May") both men display a sensitive control of their instruments.

The energy of the front line is replicated by that of the rhythm section. Carson Halley and Reed have developed a real partnership over the four years since Halley took over the drum chair. Both players have a bouncy, rich, sound and an irrepressible enthusiasm. The pair's inventive musical interplay makes for engaging listening on its own—the arco bass and rolling percussion of "Of Fives And Sixes," the funky groove of "The Get Go" or "Heat In May"'s loose, sun-baked, rhythm.

Three short improvisations, including "Conversation In Blue" and "Faint Scattered Lights," sit alongside Halley's tunes. "Trip Through Turbulence" is the sound of a quartet at play—exploring, trading ideas, pushing each other forward. A fourth piece, the father and son duet "Tale By Two," is also characterized by such energetic forward movement.

Exactly what wisdom do rocks have to impart? Don't get stoned? Keep your pumices? Inscrutable things, rocks. They sit around for ages and ages, contributing little or nothing to the international jazz scene, then they suddenly inspire The Wisdom Of Rocks. It's an album that bursts with creative energy, with the sheer joy of playing. Rocks are clearly wise beyond their years.