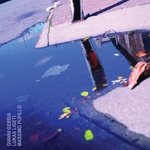 Lukas Ligeti's background encompasses jazz, avant-rock, and contemporary composition, and he eases that experience into his playing. Massimo Pupillo is an electric bassist with the Italian noise rock band Zu who has collaborated with everyone from avant folkie Eugene Chadbourne to former Can singer Damo Suzuki, not to mention Chicago reedist Ken Vandermark. Luckily his baggage here includes the rhythm, but not the stultifying beat of pop music.

Meanwhile, Sicilian alto saxophonist Gianni Gebbia is a free jazz player who adapts the musical sounds of the Mediterranean to his work with his own bands and alliances advanced with fellow improvisers in locales such as California's San Francisco Bay area. Working in a style that draws from Ornette Coleman as well as seaside balladeers, the alto saxophonist invests these tunes with techniques that range from tongue stops and altissimo smears to pitch-vibrated growls and smeared flutter tonguing.

Ligeti's accompaniment encompasses ruffs, bounces, strokes and drags. He can sound a backbeat as well as any rocker; introduce unique timbres from drum tops, claves and wood blocks that relate to the beats advanced from so-called primordial players; or alter stick-on-stick pulses and rim shots to resemble the inventions of musique concrète. And ranging from R&B-style thumb pops, claw-hammer frailing, rhythmic strums and jazzy fills, Pupillo's electric bass style provides whatever pulse is necessary for each tune. Somehow he's capable of producing arco-like wave forms, but as a rule he mostly confides himself to timekeeping, allowing the other two foreground freedom. Making the most of this, the saxophonist undulates straight lines, squeals with glottal punctuation, pushes almost-inaudible air through his bell, and negotiates unvarying tongue stops.

Climax comes with the almost ten-minute "Some Disordered Interior Geometrics." With the bassist holding straight to the center with ringing tones, the piece unrolls in a welter of surging sax lines and cross-patterning from the percussion. Briefly straying into ethnic music, Pupillo sounds timbres that could come from a lotar or Berber lute, and Gebbia completes the incursion in similar non-Western fashion. Expelling snaky obbligatos and tongue slaps at the same time, he manages to express the exposition and its development simultaneously. With more use of the location than the sonata's classic form, the three have managed to produce a memorable recording.