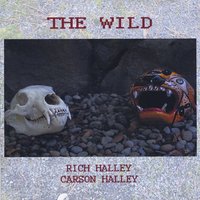 Saxophonist Rich Halley has released twenty recordings as a leader, many of them with his son Carson Halley on drums. The two have been playing as a duo for almost twenty years, working on totally improvised music together. Halley's ensemble approach is characterized by a seamless blend of composition and improvisation, but here the pair spontaneously improvised the entire set, documenting the approach they have worked on for so long.

From the start that lifetime of rapport is evident. "Wild Lands" presents a theme that is organically developed; "Progenitor" has an abstracted Latin groove, demonstrating that this is not a monochromatic project. One could easily imagine a bass part, but rhythmic and harmonic roles are complete without it. "Flat Plane of the Sky" slows things down—brushes and bluesy tenor saxophone.

Carson begins "The Stroll" alone, providing his father an earthy groove to work with. "The Old Ways" is a brief textural interlude with wood flute, a timbral and stylistic contrast. The tenor saxophone returns for the rest of the program. "From Memory" goes into late-John Coltrane style energy territory a bit, recalling his duos with drummer Rashied Ali. But for the most part Halley's approach is more melodic—more like Ornette Coleman with his son Denardo Coleman (but with drumming chops Denardo had not yet developed in his early recordings).

The duo finds space for one more ballad, the very slow and deliberate "Snake Eyes," before concluding with "Notes From the Wild Lands," an energetic closer which recalls the feel of the opener. A satisfying end to a satisfying album, far closer to Halley's group projects in overall sound than one would expect.