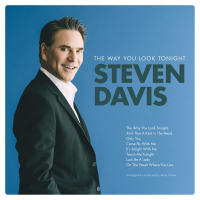 Los Angeles songwriter and vocalist Steven Davis, finally reveals a non-holiday big band vocals album of his own with the swinging The Way You Look Tonight following in the tradition of great singers like Frank Sinatra, Tony Bennett, Sammy Davis, Jr. and others. This is traditional big band swing with a new voice interpreting the standards we've all heard from icons who have voiced them before. Produced by Josh Charles at the legendary Capitol Records facility in Studio "A," right next to the Studio "B" where Sinatra often recorded, Davis called upon award-winning jazz composer and band leader Andy Farber to lead a seventeen-piece ensemble for this project.

On tap here are some Sinatra favorites such as "Come Fly with Me," "Luck Be a Lady Tonight" and "Ain't That a Kick in The Head," where the band sounds off in brassy fashion as Davis belts out the lyrics reminiscent of how the Chairman of the Board himself did so many times before. The album kicks off with the oft-recorded title track where Davis' crisp vocals reaches delivering a unique interpretation all his own as Farber and crew provide a swinging backdrop.

The band leader—who performs here and happens to be a renowned saxophonist in his own right—stacks the reed section with jazz all-stars like Kim Richmond, Ricky Woodard and industry saxophonist Gene Cipriano among others, also builds a horn section, with likes of Greg Gisbert, Ron Stout among them, designed to produces the musical power that propels the vocalist throughout the album and does so splendidly.

Along with familiar standards that Davis re-imagines here like, "Only You," It's Alright with Me" and "On the Street Where You Live," the singer also tackles the warm romantic 1954 classic hit by Gene De Paul, "Teach Me Tonight" performed by so many before him. Except that on this rendition, supported well by Farber and his orchestra, Davis turns in a beautiful vocal performance that's quite memorable.

There have been many singers who have voiced the songs found on The Way You Look Tonight, but few have done so with the same magic, excitement and romantic flair that Sinatra or Bennett often provided. Steven Davis is one such vocalist able to duplicate that musical charm and yet, be able to leave his own distinct mark on these timeless songs, well done!

The Way You Look Tonight; Ain't That A Kick In The Head; Only You; Come Fly With Me; It's Alright With Me; Teach Me Tonight; Luck Be A Lady; On The Street Where You Live.