Phil Schurger: The Waters Above

By MARK SULLIVAN
October 30, 2018
Sign in to view read count 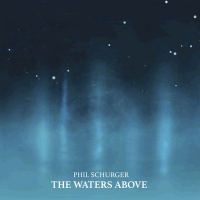 Guitarist/composer Phil Schurger is a native of Fort Wayne, Indiana. He leads his Chicago-based quartet—previously heard on Echoes of the Ancestors (ears&eyes, 2017)—through six expansive originals. The tracks run an average of ten minutes or more apiece, and they attain that length through compositional complexity rather than extended solos (although the band is blessed with very strong soloists). Not only that, but the entire set hangs together like a suite, with each tune leading naturally to the next.

"Scorpio" opens the album with a convoluted, rhythmically insistent theme. Alto saxophonist Greg Ward explores it for awhile, then bassist Jeff Greene plays a lyrical unaccompanied introduction to the second part of the tune, stating the ostinato that underlies it. Schurger plays an exploratory solo, which eventually leads to a reprise of the opening theme. Technically an ABA song form, but on a much larger scale than usual. "Anikulapo" slows things down with a lyrical theme, which Ward uses as a motivic basis for his solo. A slower variation of the theme launches a lyrical solo from the leader.

"Yoruba" could be called the first ballad of the set, beginning with rubato—but then it transitions to a faster, freer feel. As he had done earlier, Ward excels in playing feely while also maintaining the sense of the composition. Schurger opens the bridge unaccompanied and rubato, with the rhythm section joining in as the rhythm becomes more regular. The tune ends with the whole band in free mode, until the closing riff. "Inclusion" stays atmospheric and low-key for the duration, but the closer "Nogah" encompasses all of the areas explored earlier in the album: rubato, rhythmic and free.

The album title is a reference to the connection between the higher self and the lower self. For those of us who do not meditate, it can stand for the connection between the normal, everyday mind and intuition. A fine explanation for the blend of composition and improvisation shown here. Kudos to the whole band: to Schurger for exemplary composing and guitar playing, and especially to MVP Greg Ward, whose saxophone playing consistently stays true to the compositions while also elevating the music.