Proto-Kaw: The Wait of Glory 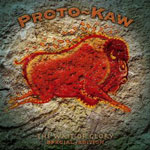 For my money, Proto-Kaw's 2004 release Before Became After was a modern-day progressive rock classic. Featuring Kansas founder and guitarist Kerry Livgren, that and this recording explore and extend concepts pursued by the group prior to the advent of its '70s-era commercial success. And while this newly issued studio session might not transcend or perhaps parallel the overall brilliance of Proto-Kaw's previous outing, it is in every sense of the word an admirable followup.

On the flip side, "Melicus Gladiator surfaces as the least interesting piece, with its rather ho-hum thrash rock style, complete with Jake Livgren's overly exuberant rock star vocals. Ultimately, though, this outing highlights the artists' tight-knit workmanship and forthright approach to the material. Once again, Proto-Kaw takes a novel slant to a sometimes demure genre with distinction and chutzpah. Recommended.

Nevermore; Relics of the Tempest; When the Rains Come; On the Eve of the Great Decline; Physic; At Morning's Gate; Melicus Gladiator; The Vigil; Old Number 63; Osvaldo's Groceries; Picture This; (Bonus Track) One Fine Day.