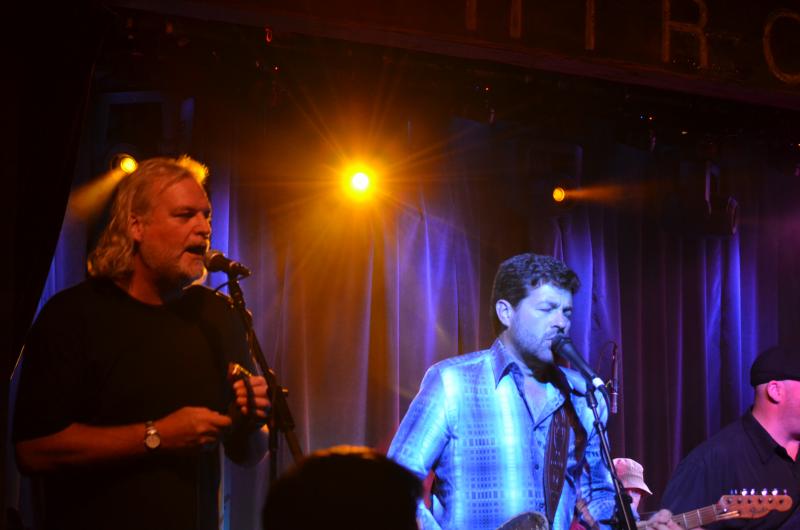 By MIKE PERCIACCANTE
October 1, 2011
Sign in to view read count
The Voice of The Wetlands All-Stars
Hiro Ballroom
New York, New York
August 25, 2011
With the first major storm in decades bearing down on the northeast coast of the United States, The Voice of The Wetlands All-Stars treated revelers to a pre-Hurricane Party at New York's Hiro Ballroom on a pleasant, if somewhat muggy, Thursday evening in late August. The show followed in the aftermath of the earthquake centered in Virginia that registered 5.9 on the Richter Scale on Tuesday, August 24, 2011. Fittingly, The Voice of The Wetlands All-Stars also made the earth (and the feet of the audience members) move as the group blasted its way through a set of Bayou-flavored swamp pop, New Orleans funk, rock, soul-injected blues, Cajun/zydeco and hoodoo rhythms and good old fashioned rock.
The evening was a musical celebration of New Orleans and Louisiana, as well as a powerful reminder of the devastation brought to the wetlands by Hurricane Katrina in 2005. The audience members' souls were fed with a jambalaya of musical styles—spicy mix of Cajun rhythms, blazing rock, hot blues riffs, call-and response chants, slippery funky soul and awesome second line-flavored jazz fills. In addition to the soul, The Voice's performance served to make the audience aware of a mission statement: to help protect the and preserve the coastal wetlands, which comes under siege every storm season.
Led by founding member and guitar virtuoso, Tab Benoit, the All-Stars were just that—a collection of world-class musicians including: guitarist Anders Osborne, The Meters' and Neville Brothers' legendary percussionist Cyril Neville, fiddler Waylon Thibodeaux, bassist Corey Duplechin, accordionist/harmonicist Johnny Sansone, extraordinary drummer Johnny Vidacovich and New Orleans Mardi Gras Indian Big Chief Big Chief Monk Boudreaux, dressed in full carnival regalia, on percussion and vocals. The set was a mixture of solo tunes and band originals from its self-titled 2005 Rykodisc release and self-released Box Of Pictures (2011). The set included Osborne and Benoit's Cajun-flavored "We Make Good Gumbo," "Bayou Breeze"—the "Don't let the water wash us away" chorus quite ominous, with Hurricane Irene due to reach the New York City area within the next 24 hours—"Me Donkey Want Water," "Louisiana Rain" and "Louisiana Sunshine," and traditional New Orleans and Louisiana favorites. Each song had a special and distinct flavor that could only have been created by this fascinating musical gumbo of talent.