The Victor Wooten Trio at The Ardmore Music Hall 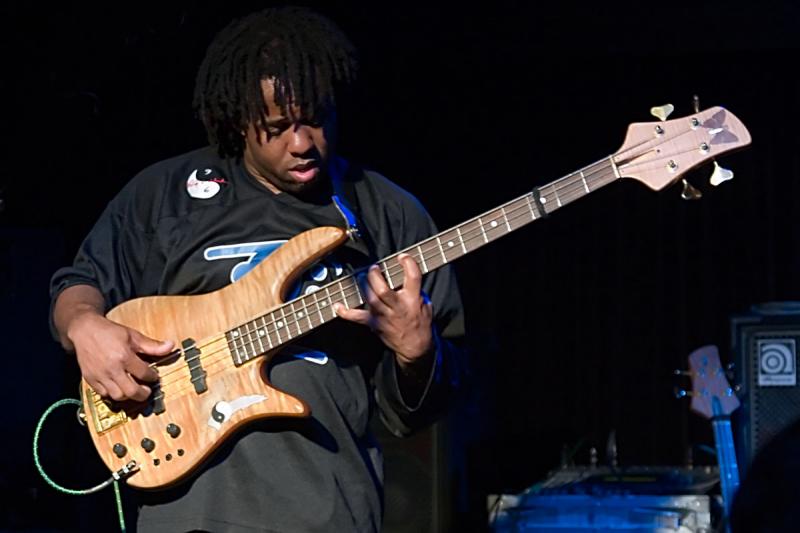 Bass innovator Victor Wooten may not quite be a household name, but he's pretty well known as instrumentalists go. This is attributable to his talents, yes, but also to the many different types of projects in which his talents have been presented over the years. From the unique crossover spacegrass / jazz / jam band appeal of Bela Fleck and the Flecktones to his solo outings and recent triple bass project SMV (with Marcus Miller and Stanley Clarke), to numerous touring and recorded appearances with a who's who in the Jazz and Jazz/Rock world; Wooten has made a name.

So when it was a sold-out, standing-room-only crowd at The Ardmore Music Hall for his trio project, it was little surprise. The heavy attendance was surely compounded by the fact that Wooten had in tow veteran saxman Bob Franceschini (Mike Stern, Yellowjackets, Paul Simon), and doubly so for having the legendary Dennis Chambers on drums.

Taking the stage and diving straight into a pair of tunes to be included on the trio's upcoming recording, Wooten and company wasted no time in engaging the packed house with not only a signature blend of melodic jazz/funk, but also a sense of fun that was equally infectious. That sense of fun in the music often masked the serious skills required for its execution. Moreover, Wooten's unique bass abilities virtually eradicated the necessity of the more implied harmonic palette generally dictated by bass/saxophone/drum configurations—(bass and sax being traditionally monophonic in nature). To say "traditional" and "monophonic" were not in VW's bass vocabulary might be the biggest understatement in a musical evening where the chops cup runneth over.

But lack of understatement is not something likely to depress those drawn to see a band that is two thirds Wooten/Chambers. Indeed, it is something their followers relish and accordingly, large swaths of the evening's set were reserved for titanic displays and interplay between the two. Dennis Chambers consistently amazing performance was especially heartening in light of his recent recovery from serious medical problems and it can be happily reported that the Chambers drum magic is clearly alive and well and in abundance.

Though exhibitions of vast facility were an expected order of the night, it would be wrong to say the performance was lacking in dynamics or subtleties. Chops monsters though they be, both Chambers and Wooten showed why they are A-Listers for musicality as well as technicality. Bob Franceschini also asserted his taste, tone and touch on a lush ballad or two then showed a deft, reactive playfulness on tunes like "13th Floor" and "Zenergy." And while he amply held his own, formidably sparring with his bandmates when called, he knew when to play colorist or bow out altogether to let Messrs. Wooten and Chambers wax virtuosic.

Because he pioneered solo bass performance more than two decades ago, it was also not a surprise that a good portion of the show was set aside for Wooten to go it alone. This perhaps is what many people came to see as much as anything—and they weren't let down. Wooten covered miles of stylistic territory in the solo set, from Latin to Funk, introspectiveness to clowning, faithfully reproduced staples to improvised excursions with spontaneous song references thrown in for good measure. And with every moment he wowed the crowd alone onstage, the notion that his solo bass concept was initially such a hard sell to record companies and promoters in the early days was made more and more laughable.

Chambers and Franceschini rejoined Wooten to close the set and then came out for an rousing encore with a trio arrangement of one of Wooten's signature tunes, "The Lesson." This capped an evening well spent and one obviously enjoyed by the appreciative crowd. Their upcoming recording together will be a keeper if they can capture half of the mojo they let fly this night at The Ardmore Music Hall.