John Coltrane: The Very Best Of The Atlantic Years 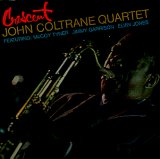 Does the world really need another John Coltrane compilation album? Yes, most certainly. The world needs as many Coltrane albums, of any description, as can be thrown at it. Even the tackiest, most opportunistic Coltrane compilations—take a bow Coltrane For Lovers (Impulse!, 2001) and Plays For Lovers (Prestige, 2003)—are redeemed by the presence of their subject, perhaps the greatest tenor saxophonist who ever lived, and certainly the most influential and enduring.

The Very Best Of The Atlantic Years is, in any case, a fine selection of material from Coltrane's first purple period as a bandleader—early 1959 through summer 1961, before the final, crowning glories of his time with Impulse! (from 1961 until his passing in 1967).

If you stuck pins in the track listings of these discs, selecting fifteen tracks entirely by chance, you'd be guaranteed of coming up with something pretty much as special as this collection—for there simply isn't one bum tune on any of the original albums. But actually, The Very Best Of The Atlantic Years has been more thoughtfully selected than that.

Personal preferences aside, most Coltrane fans would rate The Avant-Garde, Ole Coltrane and Bags Meets Trane as, relatively speaking, the least well-realized of the Atlantic sets. The compiler of The Very Best Of The Atlantic Years shares this view, and accordingly has selected four tracks from Giant Steps (including, of course, the iconic title track), three from Coltrane Jazz, one from My Favorite Things (the heartrendingly beautiful "Every Time We Say Goodbye") plus an edit of the title track made for 45rpm single release, three from Coltrane's Sound, one from Coltrane Plays The Blues (arguably under-represented vis-a-vis the other original albums), one from Ole Coltrane and one from Bags Meets Trane. The Avant-Garde is ignored completely.

Quite who this latest Coltrane compilation is aimed at is unclear, but whoever they are they're almost bound to love it. As a single CD introduction to Coltrane's Atlantic years it could hardly be bettered; and as a program for existing connoisseurs to whack in the deck and enjoy it won't fail to deliver either.