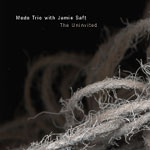 In how many ways can a band surprise the listener? Listening to this CD makes for a count of ten. The Modo Trio with Jamie Saft constantly evolve as they change shape, structure and direction. The music is never static; invention comes in at every turn as they bring in electronica, jazz, chamber music and anything else one would like to decipher. They wrap it all up in free improvisation. Together, it makes for mighty impact.

The Modo Trio is based in Edmonton, Alberta, which of course is in Canada. Craig Brenan (trombone) and Jeff Johnson (bass) came together in 1999. They were joined by Bill George (drums) in 2003. They began recording this on the same day they met Jamie Saft at the Banff Centre. The chemistry among them is in ample evidence.

One of the characteristics of the Modo sound was dub, which comes up strong and clear on "No Harm." The melody is catchy and the beat is irresistible on this grooving tune that points a finger to the dance floor. The band moves into a different spectrum with "Dream #8. Here the tone is gentle, the hues softer, wrapped in the velvet drape of Brenan's trombone.

Johnson and George take "Bender on a light traipse before it gets into a sombre mood. The quirkiness is not unusual; the musicians can find that in any of their tunes. But they do not prefer to go in one direction to see the light—they jump out and about create a plethora of sound through the Moog, the looping, the hammer of the piano, and the splash of the cymbals. The trombone goes from a thin, slivery line to a fuller thrust, the bass now playing a funky beat. The atmosphere has brightened, a welter of colours cascade, and then it's time to get laid-back and reflective. The circle of enticement is now complete.

This band drinks deeply from the fount of inspiration.

Dream #8; The Uninvited; Rocket Sauce; Bender; Aurora; Furious; Octothorpe; Solace; You are Being Probed; No Harm.