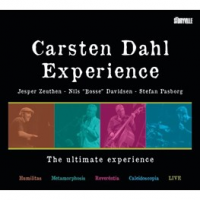 Danish pianist Carsten Dahl wears many musical hats. The one worn with the band he calls The Carsten Dahl Experience is that of Free Jazz.

This was a movement that began in the 1950s and continued into the following decade. Musicians such as Ornette Coleman, Cecil Taylor and Albert Ayler sought greater freedom of expression by jettisoning fixed chord changes and tempos. The genre received a massive boost when John Coltrane, last truly great saxophonist of the post-bop era, gave it his blessing shortly before he died.

But the fans detested it. They deserted jazz en masse, turning to rock instead.

So why is Carsten Dahl trying to recreate an archaic form of popular—or rather deeply unpopular—music? He says it allows him to fly. "Flying with these amazing musicians makes me humble and thankful," he writes in the liner notes for this five CD box set. "Finally with wings!" he exclaims rapturously.

Manfred Eicher, boss of ECM records, was interested in recording the band but was put off by the playing of saxophonist Jesper Zeuthen, which is very much in the Albert Ayler tradition (if something that uniquely way-out can be called a tradition). "I told Manfred we couldn't make a record with him," says Dahl, filled with righteous indignation at what he perceived as an affront to his artistic integrity, "It was Jesper or nothing."

He continues: "Zeuthen is the most radical member of the band with his ingenious approach and a practically Eastern European vulnerability and ferocity. He has a childlike sound that's so beautiful when it blends with my sophisticated chords."

The five albums in this collection comprise the entire recorded output of the Experience and are—to put it mildly—a lot to digest. The music—as suggested by Dahl's attitude to Manfred Eicher—is primarily for the musicians themselves. If Joe Public chooses to listen to it, well, that's his problem.

The first album—from 2008—is Humilitas. Dahl being so "humble and thankful" in those days, the band was for a while called The Sympathy Orchestra. It is arguably the most accessible of the five albums, though Reveréntia from 2013 also has its moments.

Dahl says, "I am very preoccupied by the flow that exists in nature, its particular rhythms. We wanted to form those rhythms in sound."

There is a dark, brooding quality to Metamorphosis, from 2011, the Experience's second album. Caleidoscopia (2016) and a live recording made in the Danish town of Assens in the same year, bring the story up to date.

This last one is titled Live but the audience is remarkably quiet. Have they been bludgeoned into silence by Zeuthen's Ayleresque wailings? Or have they entered a transcendental state in which they are getting to grips with the "rhythms of nature"? We may never know.