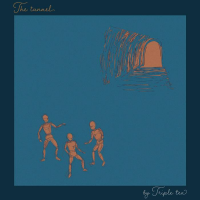 Triple Tea rip open their debut recording The Tunnel with the arena-sized rock'n'roll pugnaciousness of "1994," a powerhouse panorama that instantly reveals the 3D view of jazz and its many incorporated elements.

Though highly imagistic, Taddonio's writing is tightly conceived. Each player's sure, fervent chops adds to the creation of seven dynamic episodes, with their own distinctive scores arranged by the trio. "Fur Maryjane" is another exquisite cut; a roomy, expansive melody given time and space to breathe and become. The exhilarating title track blossoms quietly, almost mournfully, before crashing into itself feverishly, only to collapse into an unexpected syncopation, then doubles off and drifts away. Keep an ear out for these guys.