Duke Ellington And His Orchestra: The Treasury Shows Vol. 25 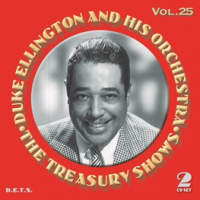 Storyville Records, based in Copenhagen, have now completed the Herculean task of re-releasing all the Duke Ellington Treasury Show albums on CD. These are recordings of broadcasts made for the US Treasury Department from 1945 to 1953, to promote the sale of war bonds, often with plugs by Ellington himself, a staunch patriot. Volume 25 is the last 2-CD set to be issued.

In addition to featuring the last-known Treasury broadcast from the Blue Note Club in Chicago on August 1 1953, this double album contains "bonus" tracks of the band playing at the Hurricane Restaurant in New York City. It is—to be honest—a bit of a rag-bag but there is one track from the Blue Note Club recordings that is an absolute gem.

This is "Duet," featuring Jimmy Hamilton on clarinet and Wendell Marshall on bass. Marshall played with the Ellington band from 1948 to 1955. He was a great, if unheralded, musician who went on to play with just about every major jazz name in the book, most notably as part of a trio led by pianist Hank Jones and featuring the great Kenny "Klook" Clarke on drums. Marshall was also a cousin of the greatest bassist to ever play with Duke, Jimmy Blanton.

Duke introduces the song here as "a concert-type thing," then elaborates, "In spite of the great difference between these two instruments tonally and technically, they manage to establish an amazing state of unity." Which is true enough.

CD 2 contains a marvellous, happy-go-lucky vocal by Ray Nance on "Jump For Joy" as well as cliché-ridden introductions galore by compere Lee Bennett.

Strangely, the very last track of the Treasury extravaganza is not, repeat not, yet another blast of "Take The A Train," but Irving Berlin's saccharine show tune "Blue Skies" from 1926. The song must have had something. Thelonious Monk would later use its chord sequence as the basis for his composition "In Walked Bud," a tribute to his friend and bebop pioneer Bud Powell. But that—as Lee Bennett would undoubtedly say if he were still around—is another story...

CD 1: Take The A Train; Boo-Dah; What More Can I Say; Frustration; Basin Street Blues; Duet; Ballin’ The Blues; Satin Doll; Moon Mist; You’ll Never Know; Lady Be Good; Tonight I Shall Sleep; Nevada; Subtle Slough; I Don’t Know What Kind Of Blues I Got; Don’t Get Around Much Anymore; Moon Mist. CD 2: At’s In There; Design For Jivin’; Jump For Joy; Solid Old Man; Sentimental Lady; Take The A Train; Now I Know; Perdido; Do Nothin’ Till You Hear From Me; Suddenly It Jumped; Indiana; How Blue The Night; Stomp, Look And Listen; Jumpin’ Frog Jump; Perdido; Do Nothin’ Till You Hear From Me; Blue Skies.