Duke Ellington And His Orchestra: The Treasury Shows, Vol. 24 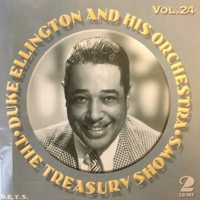 The early 1950s were a worrying time for Duke Ellington. Musical tastes were changing and big bands were going out of business. Ellington was nervous. "I like to keep a band so I can write and hear the music next day," he said, "The only way you can do that is to pay the band and keep it on tap 52 weeks a year. By various little twists and turns, we manage to stay in business."

In uncertain times, Duke took good care of business. On this, latest in The Treasury Shows series of reissues by Storyville, in a broadcast from July 24, 1953, Ellington makes several "twists and turns." He shamelessly plugs, over and over again, the venue for the broadcast, Chicago's Blue Note club—"Chicago's beautiful air-conditioned Blue Note club," Ellington purrs, as only he can, "Cool in triplicate."

With Johnny Hodges still doing his own thing, it might not have been the greatest orchestra Duke ever fronted but there were still plenty of star names: Clark Terry, Cat Anderson, Ray Nance, Juan Tizol, Jimmy Hamilton, Paul Gonsalves and Harry Carney to name but seven. Terry features early on in a fine version of "Harlem Air Shaft."

Ray Nance (vocal) and Paul Gonsalves (saxophone) collaborate on a sometimes raggedy but fun version of "Just A-Settin' And A-Rockin.'"

Then, after a gruesome Latin number, "Moonlight Fiesta," Ellington unveils a truly great new composition, one that will stand the test of time. "Satin Doll," was written with Billy Strayhorn. The historic moment of its first broadcast is cut brutally short by NBC due to progamming.

The next session at the Blue Note contains a hint of changing times in "Blue Jean Beguine," a lesser known Ellington piece, featuring high note specialist Cat Anderson, which Duke says will soon be released as a single with Strayhorn's "Boo Dah" on the flipside.

Another version of "Satin Doll," this time dedicated by Duke to Louis Armstrong, "Old Satchmo himself," is also cut short by NBC.

The next session, at the Hurricane Club in New York in 1944, memorably includes Dizzy Gillespie in the Ellington line-up. At least that's what it says in the track listings. However, as neither Duke "live and in person" on NBC, nor Ulf W. Lundin, writing liner notes in the here and now, mention this alleged, illustrious guest, the historic occasion must be taken with a rather large pinch of salt.

The second CD sees the band playing first at the Bandbox in New York. "Come On Home" is credited on the track listings as being by Horace Silver while Lundin in his liner notes claims it as an Ellington original, which seems more plausible.

There's a version of "Satin Doll" that actually goes the distance before we're back in the air-conditioned glory of the Blue Note in Chicago where the tune suffers the indignity of being used as a fade-out for a pretty routine Ellington session.