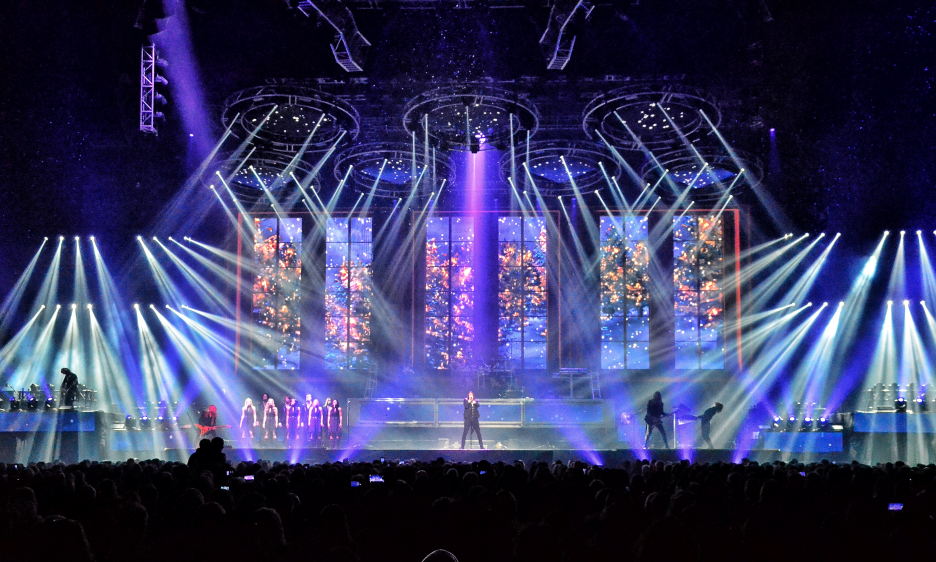 It was a rainy and somewhat miserable evening in Nassau County, NY. The Trans-Siberian Orchestra touched down at the NYCB Live at the Nassau Veterans Memorial Coliseum to brighten the lives of the sold-out crowd with a Christmas spectacular that warmed even the most hardened heart among the audience members, whose ages ranged from children to members of the Greatest Generation. The crowd also included a large number of Tweens, Millennials, Gen-Xers and Baby Boomers. The multi-generational audience filled the sold-out the Nassau Veterans Memorial Coliseum, the venue, which since its renovation, has added the NYCB Live moniker to create one of the longest names bestowed upon a NY State arena.

The concert, scheduled on the Thursday before Christmas, featured quite a few attendees decked out in their finest holiday sweaters. The Tran-Siberian Orchestra, or TSO as it is affectionately known, was founded in 1996 by producer, composer, and lyricist Paul O'Neill. O'Neill's idea was to marry classical and rock music and the artists he idolized (Emerson, Lake & Palmer, Queen, Yes, The Who, and Pink Floyd, Aerosmith and Led Zeppelin) with the soaring vocal styling of groups such as the Temptations and the Four Tops. O'Neill recruited Jon Oliva and Al Pitrelli and keyboardist and co-producer Robert Kinkel to form the core of the project. His original concept was to create a number of rock operas, a Christmas trilogy and some additional regular albums.

TSO's debut album, Christmas Eve and Other Stories (Lava/Atlantic, 1996), was to be the first installment of the Christmas Trilogy. In 1998, the band released The Christmas Attic (Lava/Atlantic). The album featured "Christmas Canon," a take on Johann Pachelbel's Canon in D major. The tune included lyrics and new melodies.

In 2004, the band released The Lost Christmas Eve (Lava/Atlantic), the final installment of the Christmas Trilogy. The album was a smash and was certified Gold by the Recording Industry Association of America (RIAA) in just five weeks.

During its career, the Trans-Siberian Orchestra also released Beethoven's Last Night (Warner Music Group, 2000) a rock opera that tells the fictional story of Ludwig van Beethoven's last night on earth and what happens when Mephistopheles comes to collect his soul. Night Castle (Lava Records), another rock opera was released in 2009. Night Castle debuted at #5 on the Billboard charts and #1 on the rock music charts. It has been certified Platinum Gold by the RIAA. 2012 saw the release of the Dreams of Fireflies (On a Christmas Night) EP (Lava Records). The EP is based on the fourth movement (Winter) of Vivaldi's Four Seasons. The group's sixth album Letters From The Labyrinth (Republic Records, 2015) is not a rock opera. It is a collection of songs on various subjects including bullying, banking, and the Berlin Wall. It was also the last to feature TSO founder O'Neill before his passing in April 2017.

Since O'Neill's passing, the band has carried-on and continues to tour. In fact, the band is so popular that there are two specific versions of the group—Trans-Siberian Orchestra East and Trans-Siberian Orchestra West. This year the TSO is celebrating its 20th consecutive year on the road at Christmas with the performance of The Ghosts of Christmas Eve, the band's holiday-themed rock opera TV movie which is the story of a runaway who finds herself in a magical, mystical abandoned theater. The group also has promised to perform a selection of its greatest songs.

As the crowd filtered into the arena, it was greeted with a huge stage set-up for the multi-media concert extravaganza. The show was scheduled to begin at 7:30pm. Due to traffic conditions causing the band's crew to arrive slightly later than anticipated, the show commenced just a few minutes after 8pm. The performance featured lasers and an amazing backdrop that appeared so real that it felt as though it was three-dimensional. Various scenes and settings were projected on a huge high-definition screen behind the band and the moving platforms from which it performed. High-tech pyrotechnics, smoke, fire and a fantastic light show enhanced the fantastic spectacle.

The performance which lasted for well over two hours opened with a delightful trio of "Night Enchanted," the amazing "Winter Palace" and "The Lost Christmas Eve." Other highlights of the concert included "O Come All Ye Faithful" which segued into "O Holy Night," "A Mad Russian's Christmas," "Hark! The Herald Angels Sing/The Three Kings & I" and the complete The Ghost of Christmas Eve staging/performance/production. The show ended with powerful versions of "Find Our Way Home," "Requiem (The Fifth)" and "Christmas Eve (Sarajevo 12/24)."

Once the bows were taken and the lights came up, the audience members made their way out to the Meet and Greet at the merchandise stand and/or the parking lot with joyous smiles on each and every face. The crowd appeared to be refreshed with happiness and hope and something one might even call "peace." The Trans-Siberian Orchestra was able to provide an evening that evoked everything that makes the Holiday Season special.