The Train & The River: A Musical Odyssey with Trio X 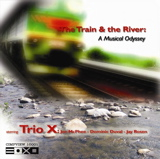 Too few musicians in the past have been able to tell their own personal stories. It has been up to historians and critics to do the work of "educating (sometimes inaccurately) the public about the music that is seemingly less than accessible, but for the musician the most real. Fortunately, present-day technology affords musicians the opportunity to widely disseminate their own self-portraits. And The Train & The River, filmed in Vilnius, Lithuania in 2006, provides such a portrait, documenting in memorable detail a trio of musicians who continued their pursuit after going unnoticed at the Vision Festival in New York years ago. The trio? Trio X, comprised of multi-instrumentalist Joe McPhee, bassist Dominic Duval and drummer Jay Rosen.

Borrowing its title from a Jimmy Giuffre piece of the same name, this visual and aural record of Trio X corresponds more to a foreign film than to a typical jazz musician documentary. The film is a pastiche of highly saturated or digitally overlaid colors within crystalline or unfocused river-scapes and train-scapes juxtaposed with muted wintry scenes of the members of the trio walking and talking together in open city- spaces. Interwoven into the mix are separate interviews of each of the trio members, but the questions are always unheard.

Dominating the soundscape is the trio's music. Among the songs featured are distinctive, inimitable versions of "My Funny Valentine and "God Bless the Child," which ebb and flow throughout the entire film. The music subsides only when the sound of the chugging train passes through the continuum of the story or when the musicians are talking directly to the camera. Footage of the trio playing in a large hall supplies several invaluable, on-location focal points. At these moments the viewer can observe the players and their instruments in a way that would normally escape an audience. The views of the trio are mostly from a distance, as if from the back of the hall. Yet, some of the shots are close-ups that place the spectator near enough to McPhee's tenor to spot the details of the engraving in the bell of the horn; or so close to Duval's fingers that the viewer is able to detect the vibration of the bass strings in response to the performer's bowing; and close enough to Rosen's snare to reveal his brushes splaying as they hit the skin.

The words spoken by the musicians are significant because they furnish the sensibility behind the music and endow it with history.

Rosen speaks directly about the equal partnership within the trio and the indeterminate "musical -ity of the music. He also speaks the least, which manifests his essence—"...because this is who he is..., says McPhee at one point in the film.

Wearing his black-lensed sunglasses, Duval likens playing the music to keeping a scrapbook about a journey through life's experiences. He describes the correlations between his and McPhee's thought and life processes and discloses in a reverent tone that McPhee could be replaced only by God.

His black outfit offset by a red wall and donning his "Poughkeepsie cap, McPhee speaks philosophically, thoughtfully and genuinely about the trio's players, his approach to making music, his past life in the music, and his poetry. McPhee is a man with a deep passion for what he does, a soulful "romantic character who knows no limits within present time except the ones that he alone is responsible for creating. He believes that the Trio and everyone he works with enlarge his family. Striving for "clarity, honesty and vision, they each are re-drawing the bottom line, which is their art.

Images of a faceless, solitary woman waiting to disembark from the train and then walking between the train tracks, a cat carefully treading across the tracks, and a single dried-out leaf floating on the surface of rippling water appear sporadically throughout The Train & The River. It is as if each image were carrying a metaphorical message: the unique individual artist keeps moving and never deviates from finding periodic destinations, no matter what intervenes, no matter what interrupts the path. The music goes on as does every phase of every life form.