By GEANNINE REID
April 1, 2017
Sign in to view read count 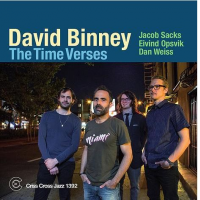 Acclaimed as a significant and extremely unique compositional talent, saxophonist David Binney is one of the most prolific jazz musicians on the scene today. Binney has created an alternative jazz scene that focuses on playing adventurous and original music, which has been key to his journey as a player. He possesses a distinctive saxophone sound and has an extensive catalog as a leader, in addition to being sought after as a sideman, appearing on record with: Medeski, Martin & Wood, Uri Caine's Mahler Project and hundreds of others. He has produced twenty-two of his own albums, and his production work on other projects includes: Scott Colley's The Architect of the Silent Moment and multiple Donny McCaslin releases, just to name a few.

Binney's 2017 release, The Time Verses, finds the composer drawing upon everyday life for inspiration. He plays alto saxophone, but also includes a few electric textures, and sampled sonic moments, these sounds and elements are used sparingly, but do add to the overall development of the suite. With the help of his acoustic jazz quartet including: Jacob Sacks (piano), Eivind Opsvik (bass) and Dan Weiss (drums). Guest vocalist Jen Shyu provides beautiful vocals on "Seen" and Shai Golan performs on alto saxophone on "Where Worlds Collide." Binney continues to expand on his growing body of work, with this impressive collection of tunes, which is an episodic, thematically cohesive, 65-minute suite. The music passes through shifting moods and environments—tracking his responses to the diurnal cycle—with characteristic inspiration and daring abandonment. This contemporary recording has deep musical substance, virtuosity and heartfelt delivery by all, which is cornerstone and makes this album a real joy to listen to, no matter what your preferred flavor or jazz might be.

After the twenty-six second opening, the electronic sounds of "Dawn," highlight the quartets in an exhilarating performance of "Walk." Midway through the almost eleven-minute tune, a child's voice serves as a transition to a new melodic statement by Binney. His solo is methodical, with fluency and thematic in its musical development. After his solo, Binney switches to an electronic voice, doubled by him singing syllables while Weiss solos. This setting is developed with the addition of his saxophone tone, building the climax, and ending.

Sacks is a key part of the album's sound, as the two share a special musical chemistry. "Where Worlds Collide" is a fine example of their unique musical language. Binney's lines weave in and out of Sacks' shifting chord voicings. The saxophonist seems inspired by the conversation between Sacks' voicings and his melodic lines; resulting in one of the finest solo moments of the outing. The core group of Opsvik on bass and Weiss on drums is the fabric the binds both players' solo statements to something special. After Binney's solo, they release the tension and start the build under Sacks' solo statements. Sacks' language is a perfect match to Binney's melodic vocabulary. This consistency in sound and texture gives the album its unifying sound.

For his eighth date for Criss Cross as a leader or co-leader, Binney documents the quartet with which he most frequently works with in New York City. Again, Binney speaks from the heart and presents his art in a way that is pure. There is no doubt that Binney make music that speaks to him, and he is not concerned with outside opinions or if the institutions of jazz find his music relevant, and for that very reason, it is untainted in its artistry! He has certainly created a demand of his sound. Maybe further proving his music theory.