The Time Capsule: Live At The Palace Of Arts Budapest 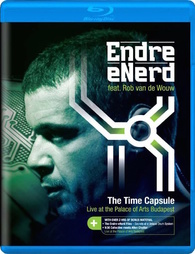 The Time Capsule is one incredibly detailed production. Drummer Endre Huszar—a.k.a. Endre-eNerd—spared no expense in capturing every aspect of this live performance that took place at the Joe Zawinul Memorial Day at the Palace of Arts Budapest. Three-hundred-and-sixty degree camera work, High Definition 3D video, and 5.1 Surround/Stereo Sound are all part of this impressive Blu-Ray release.

Huszar works like a man possessed throughout this performance, triggering samples, keeping the steady throb of the groove(s) in play, and creating smooth transitions between various sections of "The Dark Side" and "The Bright Side"—the two lengthy suites that fill out this ninety-minute program. He's always expertly steering the show, setting things in motion with various electronics, loops, samples, and real-time drumming escapades.

The drummer's intense concentration proves to be contagious, as that same quality is ever-present in this band's work. Bass guitarist Miklos Lengyelfi II keeps the bottom end thumping and bouncing; vocalist Orsi Kozma makes some entrancing contributions to "The Dark Side" and adds some pseudo-pop vocal work to the final part of "The Bright Side"—the contemporary-leaning "Keep It Coming"; guitarist Tamas Mohai and keyboardist Roland Racz brilliantly paint extra coats of sound atop Huszar's creations; percussionist Andor Gabor adds to the complex rhythmic nature of this work; saxophonist Sandor Zsomi Zsemlye makes his smooth-toned presence felt; and trumpeter Rob van de Wouw —the featured guest here—impresses by alternately delivering flurrying runs, fervor-filled expressions, controlled episodes, elongated notes and phrases, and muted Miles Davis-esque tones. All the while, Huszar is in control of the music.

As the show takes off and progresses, green computerized text periodically pops up on the lower left portion of the screen, detailing musical sections gone by and musical transitions taking place. When mixed in with the rest of what's naturally captured on this Blu-Ray—the video projections in the background on the stage, lighting changes, and drastic musical mood swings—these informational blips and the changes in camera angles and viewpoints add to the already dizzying experience of taking in The Time Capsule.

In addition to the aforementioned concert, this release contains bonus features that are more than mere "extras." Huszar gives a fifty-two minute detailed breakdown of his equipment, broken into easy-to-get-to chapters, and he includes another concert, a show featuring a meeting between a keyboards-percussion duo called Alien Chatter and another one of the drummer's bands—9:30 Collective.

It's hard to know what to call this—electro-futurism, fusion moderne, or something along those lines could work—but a genre tag is really irrelevant. Better to simply look and listen to what Huszar has created. It's art and visual spectacle rolled into one