By DAN MCCLENAGHAN
March 19, 2016
Sign in to view read count 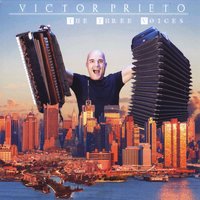 On the cover of his CD The Three Voices, Victor Prieto looks as if he's going to do something crazy with his accordions. He is a giant behind the big city skyline, towering over tall buildings. It's sort of like a "Godzilla of the squeeze boxes" scene. But the accordionist doesn't look like he's bent on Godzillian destruction; he, in fact, looks as if his intention is the spreading of musical joy.

Prieto is New York City-based now—he teaches Master classes at Berklee College of Music—but he has roots in Galacia. He has combined the sounds of Galacia with Celtic music, Brazilian moods, tango and classical music to create a brew that is distinctly and enthusiastically his own.

His original tune, the frenetic "Chatting With Chris," opens the CD. It's a high energy quartet mash up, featuring John Ellis on soprano saxophone, setting the studio on fire while Prieto fans the flames with the sweet sounds blowing off his accordion reeds. Prieto employs and almost Coltranian "sheets of sound" approach, whether in accompaniment or in his solo, in a song where both front players are tackling the task like they mean it.

"Michelangelo 70," from the pen of Tango legend Astor Piazzolla—it's one of only two non-Prieto tunes on the set—brings in an old world vibe. This is just drums/bass/accordion, and Prieto proves himself virtuosic, easing off a spirited solo to let drummer Eric Doob roll into a rumbling-tumbling solo of his own. Pianist Arturo O'Farrill sits in on three numbers, including the gorgeous and initially pensive "Games," that features a delicately compelling interplay between accordion and piano. Violinist Meg Okura joins the party on "Papa Pin." The blend of voices—violin, piano, saxophone and accordion, along with the rhythm section—paints a wondrous, diaphanous sonic wash.

Prieto includes two tunes that feature his Tuvan singing, an art that originated in Mongolia, Siberia and Tuva, described as "the individual vibration control of the vocal chords." It is and eerie, haunting sound that blends well with the drone-like backing of the accordion, a sound of a netherworld, maybe the place from which Victor Prieto emerged to loom over the skyscrapers of the city.