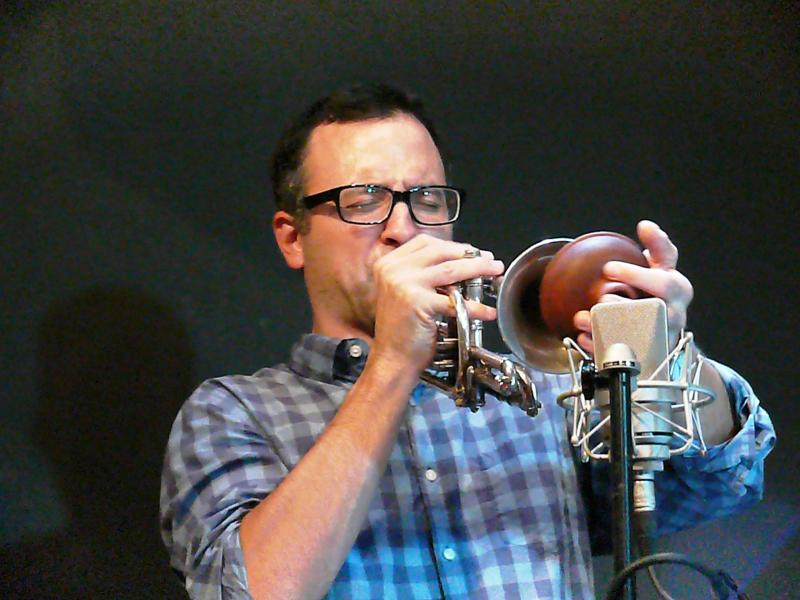 As George the announcer intimated, a lot of people had been waiting a long time for tonight's concert at north London's Vortex Jazz Club. Not only because of the stellar cast list uniting four of the most exciting talents on New York's jazz and improvised music scene, but also because the performance initially had been scheduled in June, before being postponed until now. As it happened, Thirteenth Assembly, on the final leg of a short European tour, was well worth the wait.

Each is a leader in their own right with increasingly high profile resumés: cornetist Taylor Ho Bynum has worked closely with pianist Cecil Taylor and the late trumpeter Bill Dixon, Mary Halvorson is seemingly everyone's favorite guitarist, gigging at the Vortex with saxophonist Ingrid Laubrock at the start of 2011, drummer Tomas Fujiwara makes ever increasing waves with his Hook Up ensemble (featured at the 2011 Vision Festival), while violist Jessica Pavone writes not only for her own Army of Strangers, but also string quartets and chamber music projects.

As a collective, the writing duties are shared around the band. Even though they called on a range of influences, there were some striking similarities in approach which went some way to defining the group ethos: tight but tricky arrangements, space for vignettes (rather than extended solos) thoughtfully integrated into the fabric of the compositions, attractive but low-key melodies, and a love of downbeat, enigmatic endings. In fact, they subverted expectations with such regularity that it became the expected.

It should be no surprise that such common ground existed given the cat's cradle of connections entangling the members. Look at just some of the more obvious links. Bynum and Fujiwara have two albums as a duo under their belt, trumped by four by the longstanding pairing of Halvorson and Pavone. Of course Bynum, Pavone and Halvorson are all vital constituents of iconoclastic composer/saxophonist Anthony Braxton's various sextets, septets and twelvetets, while all four have figured in the cornetist's sextet. Such familiarity may also account for the mutual ability to breathe life into complex charts, flitting effortlessly between notated intent and unfettered expression.

Two sets totaling some 90 minutes allowed for expanded versions of all seven tracks from their excellent second outing, Station Direct (Important, 2011), as well as five others drawn from their debut (un)sentimental (Important, 2009). 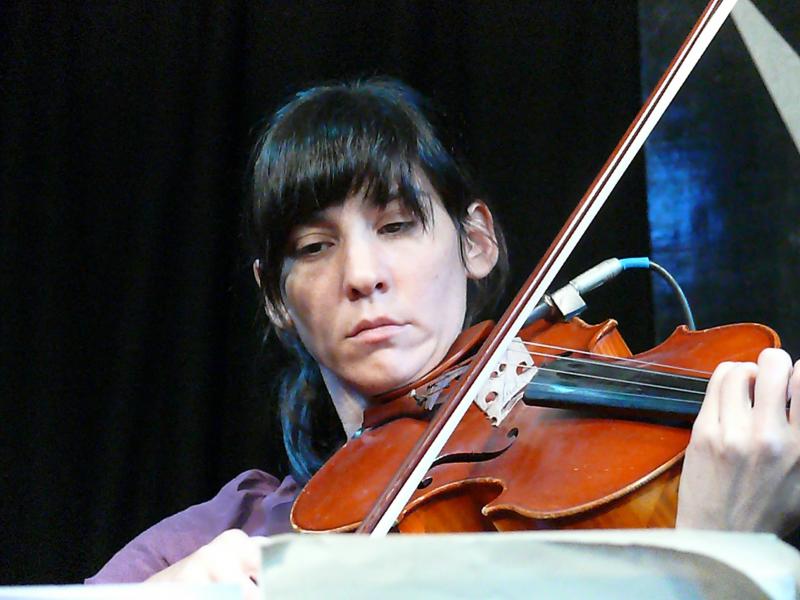 
Jessica Pavone's singing, a capella viola launched the guitarist's "Nosedive" to open the first set, before being submerged by overlapping streams from cornet and guitar to combine in a gently swinging lilt which gradually fragmented. Straightaway it was clear that this was to be an evening of smart, sophisticated orchestrations unconstrained by numbers. As paths diverged, everyone seemed to be soloing at once, until Bynum engaged the spotlight with his pinched, liquid cornet squeals which delivered the piece to a surprising conclusion

Top notch musicianship was a given, but not as an end in itself. Each member wore their virtuosity casually on their sleeve. Pavone was a case in point in her introduction to Halvorson's "P#2," at first austere, then frayed at the edges, swelling the sound with her echo pedal before the band joined with a folky air, as her viola continued its contrastingly wayward course. Later on Fujiwara's "Prosthetic Chorizo," she took a more percussive attitude, appropriating harsh swipes, glissandos, scrapes, saws and taps with her bow.

Pavone's "Coming Up," returning the compliment, prominently highlighted the drummer, opening out for a feature in which he initially concentrated exclusively on splashing cymbals before progressively involving his toms and kick drum, until finally he generated a flailing whirlwind. Having established his credentials, the piece then became a setting for a series of conversational duets with each of the others. 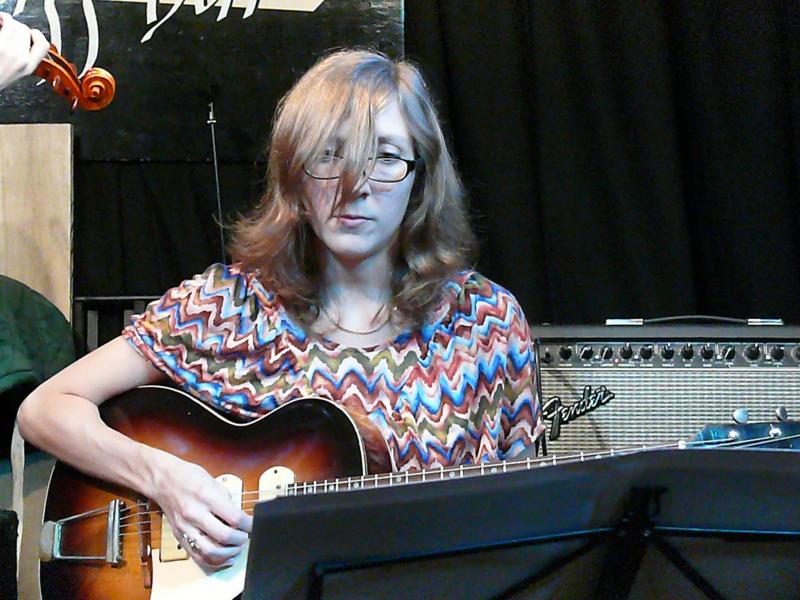 
Halvorson provided the glue that held the group together. Hunched over her wood-bodied electric guitar and an array of pedals, she contributed bass lines on her low strings, as well as diverse textures, fuzzed tones and ringing single note runs. On Bynum's "The Long Road" she did both, contrasting two separate tracks: one picked on her top string and the other alternately embellishing those patterns.

In the intro to the same tune, the author began with a litany of unconventional sounds: growling splutters exclaimed with the cornet hanging off his top lip, exhalations, groans and murmurs. Bynum spiced his excitable lines with unanticipated leaps and accents and great attention to tone, as manifest in his choice of varied mutes, from muffled coughs behind a hat to breathy tinniness as a result of using a CD, alongside more conventional forms such as a wah-wah mute to add vocal inflections.

None of their numbers followed the standard head-solos-head route. In some ways "The Long Road" was the most episodic, incorporating at different points a hokey, goofy rhythm and a cheerfully folksy Dixieland passage which accelerated into self destruction, before culminating in a drum statement which crescendoed to a finish on an unexpected note. Mention must be made of Pavone's "Direct," which boasted one of the most beautiful arrangements of the night, a lovely world weary melody with a mercurial intertwining of viola and cornet. 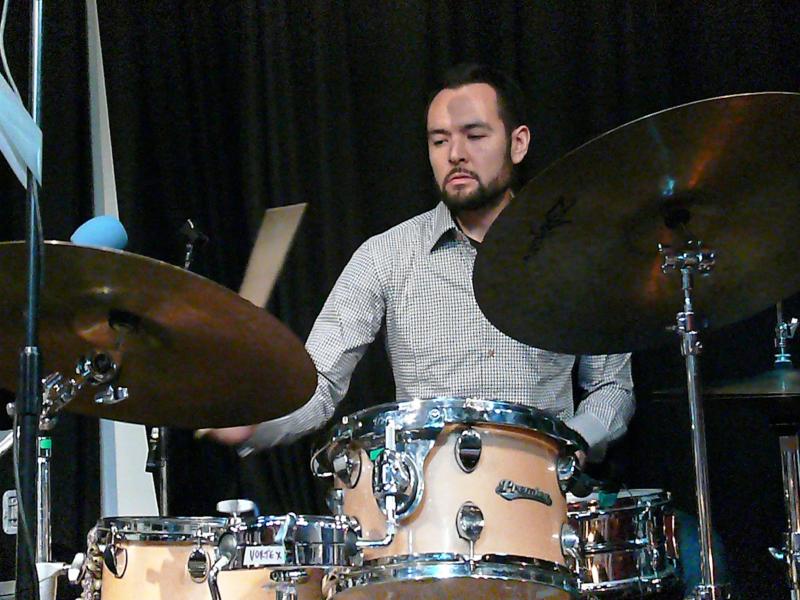 
While everyone present could count themselves fortunate to eventually catch up with such a wonderful quartet, there was good fortune as well for those who couldn't make it, because the gig was recorded for broadcast by BBC Radio 3.