By GLENN ASTARITA
February 1, 2015
Sign in to view read count 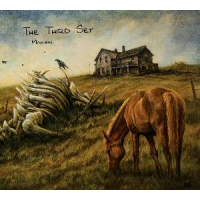 Marbin is known for its extensive touring schedules, coupled with the instrumentalists' exhilarating interactions. But in the studio, the musicians present a variegated jamboree of acoustic-electric pieces, often layered with memorable hooks and textural soundscapes amid the frontline's invigorating solo jaunts. However, The Third Set captures the unit's explosive progressive rock and jazz rock nomenclature at its finest. It's an unrelenting feast for the aural senses as guitarist Dani Rabin and saxophonist Danny Markovitch generate lightning fast unison choruses and dynamic solo sprees atop the rhythm section's tight, razor-sharp focus.

The ensemble pulls out the proverbial stops, shadowed by heavy metal and hard rock overtones via Rabin's bone-crushing chords and echoing single note excursions that quite noticeably, get the spectators' juices flowing. For example on "Crystal Bells," the guitarist's bluesy progressions lead to screeching upper-register breakouts and super-speed paths of destruction. Other regions of sound are devised with psycho rock riffing and slamming backbeats at moderate to fast tempos. And Markovitch's fervent sax lines incorporate the jazz vernacular or jazz fusion when he goes toe-to-toe with Rabin during a surfeit of spiraling unison incursions.

Rabin proffers additional interest by alternating his guitar sound within various bridge sections and soloing spots, often yielding a rainbow-like assortment of tonal contrasts. Yet on "Rabak," the saxophonist's expressive lines accelerate the 4/4 groove, abetted by Rabin's galvanizing heroics and climactic sequencing, as he deconstructs matters and rebuilds tension. Here, they pose a sensation that something ominous is lurking in the shadows, leading to a steamy hyper-mode passage, featuring Justyn Lawrence's brisk soloing across the toms. Overall, an exciting no-holds-barred presentation, firmed up by the musicians' expert technical capacities and killer stage presence that transfers to disc rather effectively.