By DAN MCCLENAGHAN
April 11, 2007
Sign in to view read count 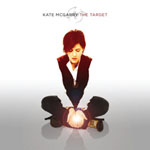 Vocalist Kate McGarry, on the cover of The Target, looks as if she's sitting in Heaven: upward cupped palms encased in a glowing aura in front of her crossed legs, the sleeves of her blouse melding with an ambient whiteness.

The Target is McGarry's third CD release on Palmetto Records, and it is a spiritual-sounding set, rooted very firmly in the temporal, opening with a yearning, wordless chant that slips into Bobby Troup's "The Meaning of the Blues." The way she and the band get deep and shape the tune into their personal statement makes me think of Cassandra Wilson. Gary Versace whispers and moans on organ; guitarist Keith Ganz inserts succinct and perfectly-placed notes in an understated atmosphere full of subtle collective strength.

The Rodgers and Hammerstein classic, "It Might As Well Be Spring," features Versace's spare raindrop piano behind McGarry's rich vocal timbre and perfect control, floating in the clouds on a breath-taking and beautiful take on the tune. McGarry adds her own lyrics to Miles Davis "Blue in Green," her words gliding over a wash of cool organ wind; and Sting's "Sister Moon," has Versace sighing sweetly on accordion—the sound that, in the same hands, added so much to the title tune of Maria Schneider's Concert in the Garden (Artist Share, 2004).

ADVERTISEMENT
McGarry penned the disc's title tune, "The Target (Miracles Like These)," a song with an engaging Joni Mitchell vibe, featuring saxophonist Donny McCaslin sitting in.

The production on The Target brings Daniel Lanois to mind at times—instruments slipping in and out of the mix, each voice distinct, each individual statement melding seamlessly into the next, with Kate McGarry's voice elevating the sound to a celestial level.

The Meaning of the Blues; No Wonder; It Might As Well Be Spring; Nobody Else But Me; Blue In Green; The Target (Miracles Like These); The Heather on the Hill; Sister Moon; The Lamp is Low; Do Something; She Always Will; New Love Song.