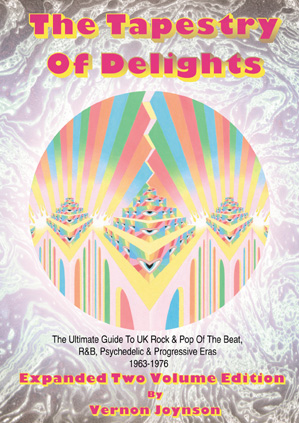 The word "cornucopia" could have been invented just for this immense two volume set. Contained within its 2,000 plus pages lies a veritable wealth of information. First published in 1995 at a modest 700-odd pages in length, and following several revised editions, this is author Vernon Joynson's attempt to cap them all with a vastly expanded edition. The time period covered, the "Beat, R&B, Psychedelic and Progressive" age, was an extremely important era and not least for British contemporary jazz.

A surprisingly large amount of jazz is featured here, especially where there has been any sort of a connection with rock or progressive genres. So the inclusion of bands such as Colosseum, Nucleus, If, Keef Hartley Band and Zzebra comes as no surprise, however what is particularly gratifying is the expansion of detail this edition affords to these groups. It should be noted that the time period covered is fairly strictly adhered to, but whilst the two final Nucleus albums recorded on the Mood label in the 1980s are understandably not mentioned, Tony Coe's Zeitgeist recorded in 1977 is given a paragraph.

As an example of the expanded entries, the third edition's (1998) coverage of Colosseum (albeit without the short-lived Colosseum II) was approximately half a page, whereas in the expanded edition it has grown to a full two and a half pages. Rather oddly John Dankworth the doyen of modern British jazz, is omitted here despite having made several key recordings during this period, however some of his band's alumni including Michael Gibbs Henry Lowther and Kenny Wheeler are given entries. Curiously, other contemporary jazz musicians from the "old wave" are given space here, such as Tubby Hayes, Ronnie Ross, Ronnie Scott and the one-off big band album by Kenny Clare and Ronnie Stephenson, Drum Spectacular.

The crossover jazz-infused progressive bands are properly represented and constitute the likes of Egg, Gilgamesh, Gong, Hatfield and the North, Henry Cow, Isotope, King Crimson, Matching Mole and Soft Machine. In addition to Howard Riley and the Spontaneous Music Ensemble, both cited in previous editions, new entries from the free jazz world include ones for Derek Bailey and Tony Oxley.

Most of the entries recorded during the chronological period discussed are accompanied by short critiques and brief biographical details of the musicians and there are several pages of tantalising colour plates of album covers. Also, interspersed amongst the pages are historic gig advertisements, serving as a poignant reminder of the many and varied venues that have now sadly bitten the dust along with so many of the bands.

What is singularly delightful in this work is the excitement generated by the serendipitous discovery of jazz entries scattered amongst the pop and rock; hybrid curios such as Chitinous by the Chitinous Ensemble (the title of which is unacknowledged in its entry here) is just one example.

For non-jazz fans though the prodigious space allocated to progressive, pop, and rock music is hugely rewarding and there's space enough for some relatively obscure bands such as the short-lived Principal Edwards Magic Theatre or Raw Material and even some spoken word items like an album by poet Adrian Mitchell or the several Monty Python's Flying Circus LPs.

Vernon Joynson has diligently researched this reference book and produced something of prodigious proportions and not merely in terms of its size. It reflects a period when contemporary music had surely reached one of its creative zeniths. This is a highly recommended work of significant historical importance and easily stands the test of time.