By EDWARD BLANCO
September 19, 2007
Sign in to view read count 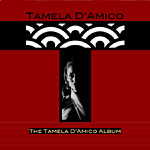 As a lover of jazz with a partiality to the big band sound and jazz vocals, The Tamela D'Amico Album delivers the best of both worlds all wrapped up in one nice musical package. A young lady oozing with talent, D'Amico is a singer, actress and filmmaker who was able to secure the support of actor/producer Peter Krause as executive producer for this recording.

She makes her musical debut in style, offering Billie Holiday-like vocals and fronting a world-class orchestra with strings. The music swings in brassy fashion and withdraws in calm on ballad tracks that feature the string section.

D'Amico surrounds herself with a host of first-call musicians from the West Coast, including trombonists Andy Martin and Bob McChesney, trumpeters Rick Baptist and Ron King, and saxophonists Kim Richmond and Rich Keller. She also enlists the help of Grammy-nominated arranger/bandleader Chris Walden, who conducts the orchestra, provides the arrangements and plays flugelhorn and trumpet.

The album contains ten tracks of wonderful standards, given fresh new treatment and interpretation through Walden's clever lush arrangements and D'Amico's unique voice. Frank Sinatra would be proud of the tender emotiveness of her rendition of his classic "One For My Baby.

A jazzy version of the beautiful "And I Love Him will appeal to fans of The Beatles. Walden's arrangements of the immortal "Perfidia, and Barry Manilow's "When October Goes spotlight the warm side of D'Amico's unique voice, as the band adds a symphonic touch through its use of strings.

Singing songs like "Charade, "He's a Tramp, "We Are in Love, and "They All Laughed, D'Amico embraces the Great American Songbook on The Tamela D'Amico Album and guarantees a lasting musical impression with a sparkling performance.

The Gentleman Is a Dope; Charade; And I Love Him; Perfidia; One For My Baby; We Are In Love; When October Goes; He's a Tramp; They All Laughed; Perfect.