Spring Heel Jack: The Sweetness of the Water 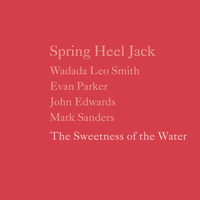 Spring Heel Jack’s previous Thirsty Ear disc captured a live performance with Matthew Shipp, William Parker, Evan Parker, and others, creating dense grooves that some compared to the churning thickness of early ‘70s Miles. Their new release has them at times light as sunbeam lint, possibly a result of guest Wadada Leo Smith’s input—the structure is more like a Smith project, or even Evan Parker’s Electro-Acoustic Ensemble. Collaborators—in addition to Spring Heel Jack, comprised of John Coxon and Ashley Wales—also include veteran rhythm section members John Edwards on double bass and Mark Sanders on drums and timpani, plus the returning Evan Parker on reeds.

Parker’s free brilliance weaves through the angelic samples of “Lata.” Occupying a familiar crux point between hyper-melodic and tuneless, Parker warbles circular breath over Coxon’s glowing vibraphone. he deftly attacks the rims and cymbals of his drumkit to open “Duo,” Coxon roaring on distorted guitar and quietly growling. Coxon and Wales create an ambient setting for Smith’s pure musings on “Track One,” Coxon adding accents on harmonica. Parker switches to tenor and trades amazing phrases with Smith.

The SHJ anchoring duo of Coxon and Ashley Wales continue to prove a flexible and supportive host for some of improvised music’s most adventurous voyagers.