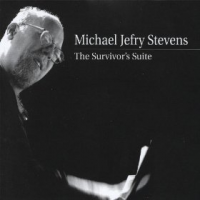 Michael Jefry Stevens is a fluid player who finds his comfort level not only on the cool side but also through free jazz and instant improvisation. His touch is both delicate and hard hitting, stopping short of bombast when he ventures into the latter. The balance is visible on this solo record not only in his choice of material, but also in his treatment of the songs, particularly in his interpretation of 'Ask Me Now.' His phrasing has an elegance, and while he does take a line at a tangent he does not let this alter his focus. Another tune that pulses is the becoming folkish 'Musica Callada #1,' where his pace is measured, his air relaxed and balmy.

As a composer, Stevens utilizes a wide palette. He essays ballads with considerable feeling, 'Quiet' making the case convincingly. The unfolding is deliberate, shading the tune gently, his left hand emphasising darker daubs. And if one looks for the influences, one can witness the ghost of Bill Evans and the visitation of Ahmad Jamal. Comparisons apart the title track covers the vast spectrum that is the wont of Stevens.

This is a completely improvised suite, and within its ambit stirs structure and freedom. Stevens suspends time and harmony; his lines arch and curve and fall in a splash of color. He unleashes bolts of thunder with his left hand and clasps melody in scintillating runs. On The Survivor's Suite he keeps blandness away, never letting pretty pictures efface his ardour.