Teagan Taylor: The Subject Of... 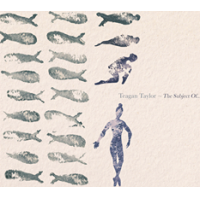 Teagan Taylor, San Diego's premier vocalist/cornetist/songwriter, released her first album I Can't Complain (Jazzomaniac Records), in 2011. It was a very capable, engaging, mosly jazz outing, featuring her distinctive take on the "Standards": "Taking a Chance on Love," "Bye Bye Blackbird," "Summertime" and the like. She was not yet twenty-one. A chance encounter with her back then at a street fair/farmer's market in San Diego's Little Italy—her cornet notes floating over the crowd like a jazz lover's dream—revealed a talented singer/horn player with a luminescent stage presence and Miles Davis-like, less-is-more instrumental approach, backed by a top notch trio, including her father and songwriting partner, guitarist Tim Taylor, and her twin brother, bassist Dylan Taylor. It was an enchanting show. Taylor and the crew followed up the debut with modernistic Wonderland (2012) and the daring Hello (2013), both on Jazzomaniac Records.

Taylor has a way of sounding a bit retro and very forward- looking at the same time. Every aspiring pop artist should listen to the production on the last three albums, especially The Subject Of.... At first listen the instrumentation is simple and spare— bass and shimmering guitar work, some subtle wurlitzer and vibes adding an understated sparkle. And the drummer (Justin Joyce) lays down a nimble and intricate beat, unlike the more fashionable (in popular music), in-your-face nuclear drums that shake the termites out of the eaves. Repeated spins of the disc reveal an ensemble as tight as the mid-sixties Motown Records groups that backed Smokey Robinson and the Miracles and The Temptations mixed with a rock attitude born of the Sun Records heyday.

"Broken Ladder" features Taylor's relaxed vocal over diaphanous guitar chords and Dylan Taylor's loping bass. Cool girl background vocals purr into the mix on this mesmerizing opener. "Default Setting" doubles down on the mood set by the opener. A bright, danceable groove, a pretty melody, smart lyrics. And then Taylor slips into a surprisingly melodious rap mode. If this were the 1960s, and the producer was scanning for a single from the set to push up the radio charts, this might be it.

"Sea Of Memories" is dark, atmospheric, a dirge featuring echoing guitar and the repeated phrase of the tune's title, Taylor's muted horn closing out, a prediction of doom or existential uncertainty. It sounds like something Lou Reed might have written. "Hunger" is bright and snappy; "See You Soon" sounds like something the Ronettes might have recorded, if Ronnie Spector had hooked up with Motown Records instead of Phil Spector.

Then there's jazz icing on the pop/jazz cake, the brief "Dream Sequence" sounds like a surreal outtake of Miles Davis In A Silent Way (Columbia Records, 1969), with an ominous bass line and Teagan Taylor's eerie muted horn, leading into the bold and relentless jazz fusion that segues into Teagan Taylor's "from-another- dimension" vocals on the oddly titled "Polka Dots."

A superb and innovative jazz pop album by Teagan Taylor and her team.