The Steve Hudson Quintet at 55 Bar

Having had the good fortune to review Outer Bridge by The Steve Hudson Quintet, I jumped at the chance to get to an early weekday show on September 13th at 55 Bar, located at, not surprisingly, 55 Christopher Street in West Greenwich Village, NYC. The show started at 7:00 pm and there were two sets, ending at around 9:15 pm, so I had plenty of time to get home.
Early shows, especially in NYC are a good idea, because it allows people who have regular day jobs to hear some good music, and 55 Bar has been doing this for a long time. The place can only hold fifty people max, so the intimacy factor, which is so important in jazz, is there.
Anyway, I notified my two jazz-loving co-workers about the event, and the three of us popped down, got there early, ordered some food to be delivered, and had a beer and watched the band set up. We were the only ones there at first, but people started trickling in, and by the second set the place was almost full. 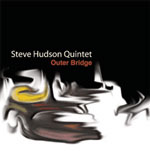 From the band's first notes, Outer Bridge came immediately back to mind and Hudson's mix of jazz, funk, Indian music and grooves took over the room. I was prepared for it, my friends were not, but however, they immediately got with the program. The band's core is, I feel, the rhythm section of drummer David Freeman and bassist Michael Noordzy. Yes, Hudson is the leader, but the vibe is produced and controlled by the constantly shifting rhythm and meter. Noordzy in particular created a different sound by playing with many large and small slides. He also used in one tune a small electric screw driver placed near the bass pickup that created an electronic bowing effect.

Hudson mostly used a Fender Rhodes that shimmered around the solos when he was comping, and which allowed his sparse solos, using the choicest notes, to ring through. Once again, the music is about vibe and feel, not pyrotechniques; it expands and contracts, pushes and pulls and shifts, never staying in the same place for very long.

Peter Van Huffel, on clarinet and alto sax, seems not to be a regular member of the band, and is not mentioned on its site. Sure enough, there were more visual cues than one might expect, but he played as if he had been living with this music. His clarinet had a touch of klezmer at times, and his alto had this delightful inside/outside quality that was picked up and passed around the band.

Mustafa Bhagat sat in on sitar, but it was mostly for color, and he did not improvise in either jazz or Indian idioms. I talked to Steve about this after the sets, mentioning Vijay Iyer and Rudresh Mahanthappa and he acknowledged that the band was working on integrating sitar into the music more directly. I noted that Iyer and Mahanthappa have Indian music in their very genes, and he smiled and laughed.

Visit the Steve Hudson Quintet on the web.