The State of Jazz Lyricists 2010: Mose Allison and Jim Pearce

By C. MICHAEL BAILEY
April 5, 2010
Sign in to view read count
There exists a unique and storied subset of jazz artists who pen the most clever music and lyrics this side of Tin Pan Alley and way that side of modern-day Nashville. Besides Bob Dorough and Dave Frishberg, who are in a class by themselves, are Mose Allison and Jim Pearce, who are also part of that rarefied class. That three of these four—all pianists and singers as well as composers—are Southerners should not be a surprise because the American South, with all of its inherent conflict, is the creative conscience of America.

Allison and Pearce are known for inventive lyrics, often self-effacing, propelled by solid, blues-oriented piano playing. This type of composition is a dying art, the marriage of the clever with the sublime. This is music that winks and nods and chuckles with the inside joke between performer and listener. 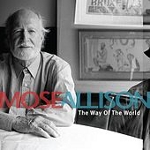 The Way Of The World

Tippo, Mississippi is a small Delta town located in Tallahatchie County within shouting distance of such blues shrines as Charleston, Drew, Sumner, Tutwiler, Clarksdale, Ruleville and Rosedale. This is flat, dusty land in transition between the fertile delta area and the gently rolling hills to the east. It is the hottest place on earth in August and the most desolate in February. It is from these humble country confines that Mose John Allison, Jr. appeared.

Who is Mose Allison, you ask? Ever heard "Young Man Blues" on the Who's Live at Leeds (Decca, 1970) or "Look Here" on the Clash's Sandinista! (CBS, 1980)? What about "Everybody's Cryin' Mercy" on Elvis Costello's Kojak Variety (Warner Brothers, 1995) or "Your Mind is On Vacation" on Costello's King of America (Columbia, 1986)—or, heck, "Parchment Farm" by Johnny Winter, Cactus, Blue Cheer, Rick Derringer, John Mayall or Hot Tuna? This is Mose Allison.

The Way Of The World is Allison's first recording since his well received The Mose Chronicles: Live in London Volumes 1 & 2 (Blue Note, 2000/2001) and his first studio album since 1997's Gimcracks And Gewgaws (Blue Note). It is a collection of 12 short studies in life events and simple emotions produced by singer/songwriter/producer Joe Henry. The disc kicks off with "My Brain," a clever tome to getting older, harmonically based on the Willie Dixon/Walter Jacobs hit "My Babe:"

"My brain is loosin' power...twelve hundred neurons every hour, my brain..."

"My brain is getting pounded...pretty soon, I'll be confounded, my brain..."

Guitarist Greg Leisz and Allison take multi-chorus solos among the rich and simple wordsmithing. "My Brain" definitely sets the musical tone of the disc. Allison has a piano style somewhere in the neighborhood of Thelonious Monk and Horace Silver, very organic and fertile. His voice has held up very well, at 82, retaining all the red clay and straw of his Tallahatchie County home. "I Know You Didn't Mean It" reveals Allison's wicked dark humor:

"I know you didn't mean it when you brought me down / It just happened to be beneficial to you.

I know you always worry about the first pronoun / you were just doing what you had to do.

I know you didn't mean it when you stole my coat / it just happened to be the logical one.

I know you didn't mean it when you slit my throat / you were out with the fellows just to have some fun."

That is smacking smart lyric writing. Producer Henry supplements Allison's typical trio format with acoustic and slide guitars and sparse horns, spreading out the down home-ness of the recording. Allison represents an era of jazz musicians that is fast disappearing. Let's honor him while we've got him.

Visit Mose Allison on the web. 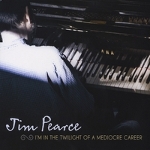 I'm In The Twilight Of A Mediocre Career

Where Mose Allison's music is colored with earthy tones of rich soil and rural Southern red clay, pianist and singer Jim Pearce's reflects the shiny New South of his Atlanta home. His instrumental writing has a show-tune sophistication and harmonic acumen, and his voice has the earnest imperfection of a crack Tin Pan Alley lyricist, a slight lisp, that makes his singing genuine and irresistible.

Pearce is a Southern sophisticate, enabling him to compose and sing a self- deprecating song like "I'm In The Twilight Of A Mediocre Career" alongside a superb instrumental ballad like "Here I Am Dreaming Rainbows." Where Allison's lyrics tend to the summer, dust-dry sardonic with a stab of danger, Pearce's are good natured and and largely without bite, like "It Ain't Fair:

"For you I'd jump through flaming hoops / scuba dive in onion soup.

Sail across the Seven Seas / Scale Mount Everest on my knees.

Ride a cycle on a wire / shoot Niagara in a tire

Fly a kite in a Hurricane / try and stop a moving train..."

How is that not infatuating?

This continues through similarly structured songs, "I Hastes Yo Leave Ya, But I Gots To Went" and "Sasquatch Is Falling In Love." Instrumentally, Pearce's compositions are equally happy and good natured. "Refried and Bona Fide" is a progressive "The In Crowd" sort of piece that defies its funky and creative title. Pearce is a full-bodied composer who can deftly write anything. Two sides of the same coin, Allison and Pearce have few musicians coming up behind them to continue this tradition of jazz vocal composition. Who is on the horizon?

Visit Jim Pearce on the web.

The Way of the World

Tracks: My Brain; I Know You Don't Mean It; Everybody Thinks You're An Angel; Let It Come Down; Modest Proposal; Crush; Some Right, Some Wrong; The Way Of The World; Ask Me Nice; Once In A While; Alright; This New Situation.

I'm In The Twilight Of A Mediocre Career

Tracks: Let's Run Away; I'm In The Twilight Of A Mediocre Career; Noodlearity; Here I Am Dreaming Rainbows; Almost To Brazil; I Hates To Leaves Ya But I Gots To Went; Just Another Spring Song; Refried And Bona Fide; Sasquatch Is Falling In Love; Happy Keys.