Jakob Bro: The Stars Are All New Songs Vol. 1

By JAKOB BAEKGAARD
June 6, 2008
Sign in to view read count 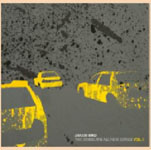 The transition from promising talent to well-established artist isn't always easy and some musicians seem doomed to be placed in the eternal category of "interesting new voice." Clearly that is not the case with young Danish guitarist Jakob Bro, who has become one of the leading stylists in a new generation of jazz guitarists that include his fellow players in Paul Motian's band, Steve Cardenas and Ben Monder.

Bro's evolution as an artist has been a journey towards simplicity. At the beginning of his career he wrote very complex tunes strongly influenced by Ornette Coleman's avant-gardism. Now he has found a new aesthetic that, instead of filling the air with notes, lets the melodies grow out of silence and space. Bro's trademark has become the creation of simple, enchanting melodies that always hint at more. He has created a new kind of complexity that is determined by what is around the form and not what is in it. His music demonstrates a breathing of time similar to the music of Tomasz Stanko and Paul Motian, both of with whom Bro plays.

As the title, The Stars Are All New Songs Vol. 1, implicates the album is the first part of a trilogy that might turn out to be Bro's most ambitious work yet. The players involved speak at the highest artistic level: saxophonists Mark Turner and Chris Cheek, guitarists Bill Frisell and Kurt Rosenwinkel and drummer Paul Motian are among the names enlisted but the album is not about the stars it is about the songs, the music. All the established names, with their individual sound signatures, manage to step aside and become a part of the world of Bro's compositions, and a world it is indeed. From the opening "Sound Flower," with Frisell and Bro's slowly intertwining bell-like tones, a singular universe of sound unfolds that is organic like a flower.

Most of the tracks are built around the quartet of Bro, Frisell, Motian and the superb bassist, Ben Street. However, some of the highlights include the soft velvety voices of Cheek and Turner. Cheek teams up with legendary Danish jazz-iconoclast Jesper Zeuthen on the breezy and melodic "The Boy From Saladan," while Turner, Zeuthen and Andrew D'Angelo create a wall of sound on the inspired waltz, "Duke Ellington Boulevard" and Mingus-like "Drumscapes."

Throughout, Bro manages all aspects of the world of sound. From the dreamy, surreal, abstract, melodic lines of "Reconstructing A Dream," that sees Rosenwinkel contributing, to the heartfelt ballad, "Eugenie," Bro retains a unique artistic vision. The Stars Are New Songs Vol. 1 is the next step in Bro's creative process. Many projects are lined up in the future and it is impossible to know what his next step will be, but this album clearly emphasizes that Bro has found his own path to the stars and lovers of modern jazz would be cheating themselves if they weren't listening.