By EYAL HAREUVENI
July 30, 2014
Sign in to view read count
Soprano saxophonist Joe Rosenberg, who splits his time between Paris, France and Bali, Indonesia, has a highly personal approach to playing and improvising. He stresses a spiritual search for an inner sound that may enlighten his music with profound, timeless meaning. Regrettably, Rosenberg records rarely. His last effort with the Signal to Noise quartet, Tag, was released in 2009 (Quark). His highly impressive new albums feature a distinct approach and unique compositions. 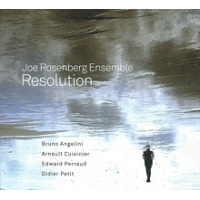 Rosenberg frames the debut album of his French chamber ensemble with three quotes. The first reflects on a spiritual approach that corresponds with this album's title, a rearrangement of John Coltrane's second movement in the classic A Love Supreme (Impulse, 1965). Rosenberg interprets this concept as: "firmness of mind and purpose, the process or act of separating something into its constituent parts." The second statement is by scientist and cultural hero Albert Einstein who said "not everything that can be counted counts, and not everything that counts can be counted." The third quote is from baseball player Yogi Berra: "I feel more like I did when I first got here that I do now."

The ensemble—Bruno Angelini on piano, Arnault Cuisinier on double bass, frequent collaborator and label owner Edward Perraud on drums, Didier Petit on cello and Rosenberg on soprano sax— faithfully realize Rosenberg's vision. The quintet, together and as soloists, focus on their resolute search for the essence of sound. A sound of profound emotional effect but one that can also be minimalist, almost ethereal; that can resonate throughout the listening experience, inspired by any and all sounds.

The longest pieces here stand out. The first is a soulful arrangement of George Harrison's "Blue Jay Way," originally performed by The Beatles on Magical Mystery Tour (EMI, 1967). Petit's gentle cello references the Indian raga- tinged theme of the original while Rosenberg's sax gently abstracts the emotional core before the ensemble joins for some joyful reconstruction. "Resolution" follows the dramatic progression of the original piece, anchored by double bassist Cuisinier, but does not attempt to replicate Coltrane's iconic solo or the quartet's approach. A reflective spirit in the ensemble emphasizes their own meditative interplay and unique, independent sound. 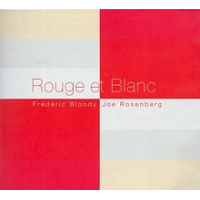 Again, Rosenberg cites three cultural heroes on the sleeve of his first duo album with the still-underrated French pianist Frédéric Blondy. He returns to Einstein with "one can organize to apply a discovery already made, but not to make one"; and Berra, who warned "you've got to be careful if you don't know where you are going, because you might not get there," adding jazz forefather Louis Armstrong who said: "All music is folk music. I ain't never heard no horse sing a song." All quotes frame Rosenberg's musical journey beautifully. The essence of the music making process and resulting music itself are humane acts of communication.

The album was recorded on two dates in November 2011 and April 2012 in Paris. All six compositions refer to imaginary nuances of color. Indeed, these poetic titles reflect the atmosphere and feeling of the music, detailed with great imagination.

Rosenberg's phrasing is brief and segmented as he patiently structures fleeting pieces into a greater whole. Blondy rarely uses the piano as a conventional chordal instrument. He produces metallic-percussive sounds from the strings or from inside the piano body that charge the warm, meditative tone of Rosenberg's focused progression with tension and surprising fractured resonance. This reserved, spiritual approach is beautifully realized on "Vermilion Smoke." Rosenberg's whispering tone and the delicate, resonant touches of Blondy create a profound emotional effect. On "Raspberry Ghost" the two explore a more playful and passionate means, forming a duet between sax and piano.