Sylvia Herold and the Rhythm Bugs: The Spider and the Fly

By C. MICHAEL BAILEY
August 6, 2012
Sign in to view read count
Track review of "The Spider and the Fly" 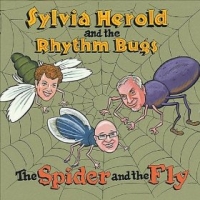 The Spider and the Fly is a novelty jazz disc in the best sense of the word. Guitarist Sylvia Herold and her Rhythm Bugs prove intent on archiving Swing era vocal harmonies using the songs of the period. This disc may readily be categorized in the same genre as Karen Johns & Company's Peach (Self Produced, 2012). These are the harmonies that can be found on those Saturday reruns of The Lawrence Welk Show, circa 1972. This is seriously nostalgic.

The title tune was composed by Fats Waller in 1938, derived from the nursery rhyme of the same name. Herold and her group sing this song straight with ever the slightest hint of WEestern Swing à la Bob Wills, with Christian Tamburr's vibraphone, dampened almost to a marimba sound, replaces the steel guitar. This is soundtrack music to the American experience, easily understood and projected.

Title: The Spider and the Fly | Year Released: 2012 | Record Label: Self Produced