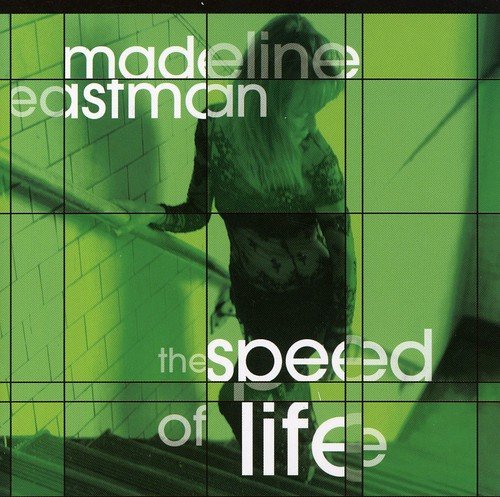 My suggestion for the cover of jazz vocalist Madeline Eastman's next album is a shot of her poised to dive into an uncharted body of water. This is one lady who is not afraid to take chances with existing material and even from note to note. The San Francisco singer has recorded five albums for her own Mad-Kat label—and although I haven't heard all of them, I would venture an opinion that she hasn't lost a step since 1990.

These twelve songs include six from Richard Rodgers (with Hart and Hammerstein). The unusual choices are an old Donny Hathaway song, "Someday We'll All Be Free"; and Jose Neto's "Jogral," presented as a up-tempo samba scat number. Typically, the album begins with the Deitz & Schwartz tune "Alone Together." After an impeccable first chorus, Eastman toys slyly with the melody line, injecting enough variations to make you sit up and take notice. As is the case throughout, trumpeter Mike Olmos adds a solid dimension with accompanied muted obligatos.

The Broadway show tune "Do I Hear A Waltz?" is performed in a decidedly un-waltz-like swing tempo for an interesting take on this under-utilized song. A real coup is accomplished with the Geffen-King pop hit, "Up On The Roof," transformed into a real jazz ballad. The Arlen-Koehler "Get Happy" is given a dirge-like reading that makes an ironical twist on the lyrics, but it doesn't work; and the Rainger-Robin ballad "If I Should Lose You" takes off midway into an up-tempo pace. I rather liked the version of "There's A Small Hotel" in which Olmos echoes her scatted solo with muted trumpet, but "We Kiss in a Shadow" tinkers with some deconstruction that leaves one walking a tightrope, not knowing where the next note will fall.

Eastman is supported here by the aforementioned Olmos, who maximizes his presences on all tracks, plus pianist Randy Porter, percussionist Michael Spiro, and the notable combination of Rufus Reid and Akira Tana on bass and drums. I suspect that a live performance would be an event full of surprise, with the audience not knowing what to expect or even how they'll react.

Alone Together, Someday We'll All Be Free, Do I Hear a Waltz, Up on the Roof, There's a Small Hotel, We Kiss in a Shadow, Dancing on the Ceiling, Wait Till You See Her, If I Should Lose You, Get Happy, Jogral, Where or When