By BRUCE LINDSAY
September 15, 2016
Sign in to view read count 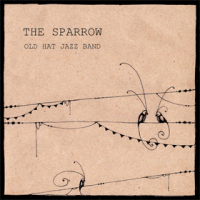 The Old Hat Jazz Band is a London-based group of young musicians that made its first appearance on record with its self-titled and self-produced four-track EP in 2015. The debut release established the band's musical prowess as well as its genuine feel for early jazz. The Sparrow proves that the band has strength-in-depth, as it swings and sways through its first full-length album of varied—and hugely enjoyable—moods.

The Sparrow is a collection of original tunes by individual band members, appearing here for the first time with the exception of drummer/leader Elizabeth Exell's "Grandma Iris" and saxophonist William Scott's "Ledra Street Stomp," which are both billed as "bonus tracks" and appeared on the band's debut release. The band refers to the album as "Our interpretation of early jazz." It's a valid description of what's on offer—the spirit and swing of the music's early decades is right at the heart of these tunes.

There are plenty of highlights worth noting—Louis Thomas' arco bass solo on Scott's "Feverish Blues," Andrew Oliver's sparkling if brief piano intro to Thomas' "The Sparrow," the jaunty rhythm of Oliver's "Biguine [sic] Du Vieux Chapeau," and the Ellington-esque grace of Exell's "Eternal Sunshine." But above all, The Sparrow is a collective success, a strong set of compositions allied to excellent performances. Thomas' mournful "Blue Town," Scott's fast-tempo and upbeat "Balance Blues," Exell's smooth and sophisticated "Cable Street" and Oliver's irresistibly catchy "Sancy Strut" show the band's range as it moves from slow ballads to faster numbers with the emphasis firmly on dance. If at times it feels like the joy has been lost from jazz, The Sparrow proves that it's still there to be found.

About The Old Hat Jazz Band