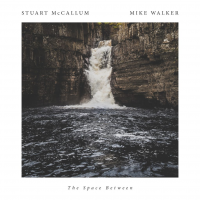 The Space Between is the follow-up album to this intriguing guitar duo's first album from 2014, Beholden. Both of these British guitarists, long-time friends hailing from the North West of England (the Greater Manchester area to be precise) probably need no introduction since they've been making waves on the jazz scene and beyond for years.

The opener, paradoxically entitled "And Finally" begins with a melody that teasingly almost perverts that most well-known theme from Beethoven's "Ode To Joy." It also contains some of the raunchiest of Mike Walker's electric guitar work to be found on the album.

Burt Bacharach's "Alfie" doesn't need much commentary other than to say it's elegantly executed by the two sumptuously interwoven guitars. The pastoral "Moment," embellished by strings, has an intriguing background effect that comes close to the sound of a distant steam train but this doesn't mar the overall enchantment of the lyrical haunting melody.

"Yewfield" is the very embodiment of the term pastoral but also exudes a Pat Metheny-like quality. Debussy's "String Quartet In G Minor (excerpt from the 3rd movement)" is arranged and expertly performed by Stuart McCallum, evincing a keenly dulcet interpretation. Its title is somewhat ironic considering that the duo employed an actual string quartet for four of the numbers here, but not on this piece.

The filmic title track is augmented in places by the strings, serving to emphasise its languid, hypnotic feel. Walker renders a bluesy accompaniment to McCallum's languorous acoustic guitar on "As The Trees Waltz," the duo being joined by the string quartet in the middle section to add emotional heft. The Whiting and Chase standard "My Ideal" is given a relaxed interpretation, with Walker's crystalline guitar tones sounding nearer to Bill Frisell.

The final number "Sky Dancer" is underpinned by percussive tabla-like effects, adding to a slightly Eastern ambience, but crucially is adorned mid-way by Walker's coruscating electric guitar solo. Whilst generally on the album, the guitarist is restrained, here he is not and this feistiness is definitely his strong suit. The six new pieces presented here were composed by McCallum, and the album consistently highlights the originality and natural compatibility of these two virtuoso guitarists. It's an album you instantly want to play over again.

And Finally; Alfie; Moment Us; Yewfield; String Quartet In G Minor (excerpt from the 3rd movement); The Space Between; As The Trees Waltz; My Ideal; Sky Dancer.